Themes: Adventure/quest (kind of Game of Thrones-esque but queer)

It is the first book in the series and not a standalone story. There will be an HEA over a three-book arc. The first book isn’t quite a cliffhanger, more of a to be continued ending.

Darkness grows in the realm of Taleth. To the west, a power-hungry despot schemes to conquer kingdoms and territories alike by chasing an ancient elven prophecy that could give him the power to rule all. In the east, after a prince’s murder goes years unanswered, a princess learns there was much more to her brother’s death—and to her life—than she realized.

The House of Kjenelach is shaken to its foundation when Princess Sigrid is stolen away. Her faithful guardian, Sir Senne Clayward, reluctantly accepts help from his nemesis, a notorious halfling mercenary of questionable morals—but indispensable tracking skills—called Kasimir vas Hjardar.

Kasimir makes his living hunting monsters, both creatures and men. While he exists outside the law, he lives by his own unassailable code of honor. At the top of that list: never harm a child. When he turns down a contract to kidnap Sigrid and later finds out she was taken by someone else, he offers his help to the prickly knight tasked with protecting her.

Together, they embark upon a journey across the continent to save Sigrid and foil King Prosper’s plans to conquer Taleth. The way is fraught with dangers and pitfalls, from supernatural beasts to Senne’s deathly fear of magic, but they must not fail, for Sigrid may very well be the savior of the realm: the long prophesied Aisnellach Fuil. Somehow, the two men must set their differences aside and work together to rescue Sigrid, and possibly find love along the way.

Okay, I’m definitely hooked for more after reading Wicked Lovely.  With action, adventure, magic, romance, and imperfect main characters this story had me fully engrossed the whole way through.

While the intentions of most of the secondary characters cannot be absolutely known yet, I think it’s quite certain that Senne and Kasimir are one hundred percent dedicated to saving the princess—and likely the realm as a whole.  Senne has a justified fear of magic to overcome since without it their journey is liable to fail, but the connection he starts forming with Kasimir as their journey progresses might just be the thing to help.

Kasimir is a halfling, but not of a type Senne expects.  Kas’s true nature can be both dangerous and protective, and is exactly what they need to both survive and save Princess Sigrid.  Kas and Senne work well together (when they’re not arguing about how to get things done), and their chemistry is obvious (and oh yes, HOT).

I was so wrapped up in the story I was sneaking in reading time at work.  There was always something going on, and the intensity level was elevated for much of the book.  There is more to come, and the story ends on a cliffhanger so be prepared going in to commit to the series…not that I think that’s a hardship at all as I think the story so far has been riveting!

Five stars for Wicked Lovely, and I’ll be waiting here on edge for the next installment.  I’d definitely recommend this for fans of epic M/M fantasy romance, plus you get the added bonus of a strong young princess who can hold her own while Senne and Kas work on finding and saving her.  This story is meant for readers 18+. 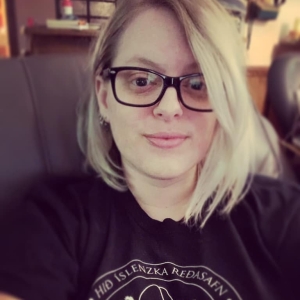 J.K. Hogan has been telling stories for as long as she can remember, beginning with writing cast lists and storylines for her toys growing up. When she finally decided to put pen to paper, she found her true passion. She is greatly inspired by all kinds of music and often creates a “soundtrack” for her stories as she writes them.

J.K. resides in North Carolina with her husband, two sons, and their pets. If she isn’t writing, J.K. can be found designing book covers at Wicked Pixel Designs, creating fiber art and supplies at Earthbound Fiber Arts watching Hurricanes Hockey and, of course, reading!

your choice of ebook from the author's backlist