It is a standalone book, but there are soft ties to Morgan’s Fox Hollow series. Other than the shared elements of the magic emporium, it does not connect to any of the other books in the Magic Emporium series.

A series of long-ago disappearances leads cold case private detective Austin Williams to investigate a troubled sanitarium. Jamie Miller is new in town, temporarily running the local historical association, and he willingly signs on to help solve Austin’s mystery. Sparks fly between them as they dig into the hospital’s troubled past. But someone wants the past to stay buried—and is willing to bury Austin and Jamie to keep it that way.

Haven is part of the Magic Emporium series. Each book stands alone, but each one features an appearance by Marden’s Magic Emporium, a shop that can appear anywhere, but only once and only when someone’s in dire need. This book contains explicit scenes, action, mystery, hurt/comfort, geeks in love, supernatural secrets, a brave historian and a lovelorn private detective, plus a guaranteed HEA. It is loosely connected to my Fox Hollow series. 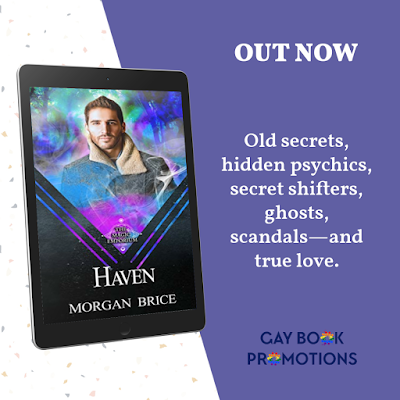 The alarm on Jamie’s phone went off, telling him it was time to lock up. “I have to close on time,” Jamie said, sorry to bring the conversation to an end. “Our insurance company won’t let me stay open beyond the posted times or have anyone inside after we’re closed.”

Austin rose. “I understand. Thanks for listening. I’ll be glad for any help.” He paused. “One more question—where’s a good place to get a bite to eat?” he asked with a slightly shy smile that sent a surge of heat to Jamie’s groin.

“Do you like pizza? Moosehead Inn is a locals’ joint that serves great food. I was going to head over once I lock up—you’re welcome to join me if you don’t have other plans,” Jamie offered, trying to sound nonchalant.

Did I just ask him out? Holy sh*t. I haven’t done that in…forever.

Austin brightened, and his smile grew broader. “I’d like that. I’ll wait outside. Can we walk there? I didn’t bring my car.”

Jamie nodded, still a little surprised at his own boldness. “Sure. See you in a few minutes.”

He ushered Austin out the door and locked it behind him. Fortunately, Jamie had gotten a head start on the lock-up checklist before the sexy stranger arrived. He powered down the computer and started flipping off light switches as he made his way toward the back door.

This was the part he really disliked. Once he turned on the alarm system, the security lights would come on. But on the way to the back door, the old house got darker, and the shadows stretched longer with every switch he flicked.

I thought I knew what I was getting into when I took the job. But it’s just temporary, and I’m still sending out applications for something better, he reminded himself.

An old house like this was likely to have ghosts, even without being turned into a museum of sorts. Bring together the personal belongings of hundreds of people, bits of local history, journals, and letters, and it didn’t surprise Jamie that the place was haunted. Even if no one else seemed to believe it.

Click, click, click. He turned off the lights in the foyer and the former sitting room and dining room. Jamie had closed up the upstairs rooms early since it was a slow day. It held a storage area, a library of books written by local authors and books about the Saranac Lake area, as well as a conference room and a small classroom for lectures. The attic and basement were storage areas that weren’t open to the public, which made Jamie very happy since both gave him the creeps.

Click. The lights in the old parlor went dark, and Jamie braced himself. On the nights the ghosts felt frisky, this was when the shenanigans started.

A cool breeze out of nowhere made the hair on the back of Jamie’s neck rise. He heard the glissando of crystal pendants gently bumping together, the decorative dangles on a vintage oil lamp in the parlor that shouldn’t have any reason to move.

Jamie resolutely ignored the shadow gliding just at the edge of his peripheral vision as he hurried down the hallway. The kitchen doubled as the staff room and was the least haunted place in the building. Jamie heard footsteps on the stairs and forced himself to breathe. He knew there was no one else in the old house—at least, no one living.

In the room to his left by the back door, the former sewing room for the ladies of the house, he glimpsed a familiar gray figure and heard the swish of crinoline and linen. To his right, in the small office that was once the cook’s room, a rocking chair creaked.

Jamie’s hand shook as he set the alarm. The ghosts didn’t act up every night, and some evenings they were more riled than others. So far, none of them had tried to hurt him. As unsettling as the ghostly manifestations were, Jamie couldn’t object to spirits wanting to stay in a place that meant something to them. He didn’t mess with them, and he really hoped that meant they would return the favor.

The alarm beeped, and the security lights came on, dim but enough to send the shadows scurrying. The sounds stopped, and the house grew quiet. Jamie slipped out the back door and checked the lock, then let out a long breath. The halogen light above the door made the area around the steps almost as bright as day. He shook off the weirdness and smiled, excited about dinner with Austin.

This could be a pleasant diversion, Jamie told himself. Austin was just in town to look up some family history, and Jamie’s role with the archive was temporary. Nothing said they couldn’t have a little fun while their paths crossed.

Not only does this story work perfectly within The Magic Emporium series, it is a fantastic addition to the current world in which a large number of the author’s stories are set.  I love that we get to see some character crossover from her other books, and that those characters help Jamie and Austin get through their situation.

Austin is just trying to help his grandmother achieve closure with her brother who was sent away when she was very young.  Jamie is just temporarily filling in at the historical society.  Each have their own small “gifts” that come into play along the way, and their almost instant rapport and ease with each other lets them form a good team to try and discover just what happened all those years ago at a not altogether healthy sanatorium.

The two are not just good partners working on the case—they’re a great match on a personal level too, something that both men having been missing in their lives.  Even though the story takes place over a short time period, the relationship development between them did not feel rushed.

With the right amount of excitement once they start to dig too close to the truth for some of the local folks’ comfort and the romance brewing between Austin and Jamie, it makes for an intriguing read from start to finish.  4.5 stars for Haven, and I’d absolutely recommend this story to any M/M paranormal romance fan.  This book is meant for readers 18+ for adult language and sexual content.

Series include Witchbane, Badlands, Treasure Trail, Kings of the Mountain and Fox Hollow. Watch for more in these series, plus new series coming soon!

Sign up for my newsletter and never miss a new release