It is the 5th book in the Witchbane series but can be read as a standalone.

A cycle of ritual murders. A coven of dark warlocks, drawing their immortality from the magic of their dead master. Two men sworn to stop the deaths, destroy the warlocks, and avenge the victims. Except this time, the killer flips the script.

Seth Tanner swore vengeance on the dark witches who killed his brother, Jesse. He rescued Evan Malone from one of the witches, and they’ve fallen in love despite the danger and chaos, going on the road to complete the quest and bring an end to the ritual murders. Their relationship is still new, tested at every turn by danger and magic.

Seth and Evan head to Charleston to stop the next warlock and save his intended victim. But this time, they’re too late. The warlock has already powered up, and he’s determined to destroy the two hunters one way or another. A deadly curse on Seth and Evan means time is running out. Can they find a way to turn the tables, or is Charleston their final destination?

Unholy is an urban fantasy MM paranormal romance with plenty of supernatural suspense, hurt/comfort, hot sex, found family, dark magic, and paranormal thrills. It is part of a series but can be read as a standalone and features an evolving, established romantic relationship with all the feels. Intended for readers 18 years of age and older. 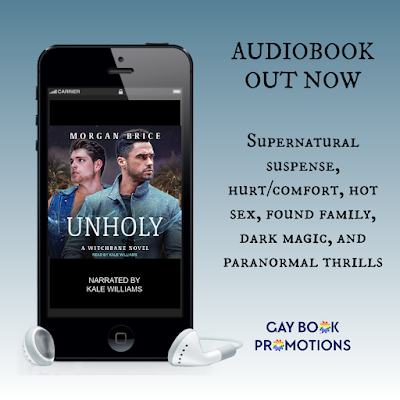 I have become so thoroughly invested in this series.  This time around Seth and Evan are headed to Charleston, and after a very rough start get to meet up with a group of characters from another series by the author.  I loved having this full-on infusion of characters into Seth and Evan’s storyline, primarily because they each bring their individual talents to the table and everyone works so well as a team.

Bringing in this set of characters doesn’t overshadow Seth and Evan’s story, it actually enhances it quite a bit.  It definitely places the spotlight on found family, particularly for Evan, and if I hadn’t already added their books to my TBR, this story would have had me doing it now.

The stakes are even higher this time around with Seth and Evan encountering trouble almost from the very start of the story.  There are new revelations regarding the “why” behind the witch disciple plans that will change everyone’s perspective.  And to top it al off, the guys have an unusual problem getting in their way—literally—that does a number on them emotionally.

It’s another exciting hunt with new elements introduced to keep the series fresh, and I can’t stress enough how much I enjoyed having Cassidy, Rowan, Teague and the rest of the crew from the Deadly Curiosities series along with cameos from Badlands and Night Vigil series characters.  Don’t worry, you don’t need to have read all these other series to understand what’s going on here in Unholy (though you should have read the prior Witchbane series books).  Unholy was a 5-star book for me, and though Seth and Evan don’t get much physical time with each other this story is still meant for readers 18+ for adult language and sexual content.

The narration: Kale Williams continues to do an excellent job narrating this series with consistent character voices, even pacing and just the right amount of emotion.  I wound up listening to this in a single sitting thanks to being so thoroughly pulled in to the story.  5 stars for the narration!

Series include Witchbane, Badlands, Treasure Trail, Kings of the Mountain and Fox Hollow. Watch for more in these series, plus new series coming soon!

Sign up for my newsletter and never miss a new release