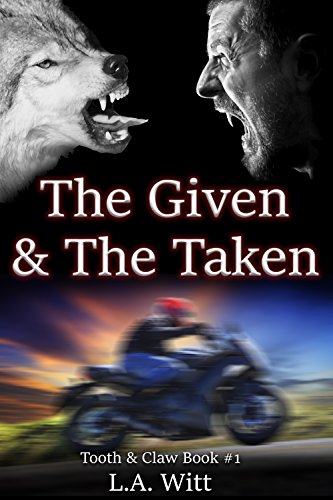 Levi finally persuaded his wolf clan to allow him to bond to Ian instead of his predestined female mate. The catch? They have to spend a year apart after the bonding ritual. Then Ian must-using only their newly-forged spiritual connection-seek Levi out, proving the bond actually worked despite Ian being human.

Now the year is over, and Levi is desperate to have Ian back in his arms, but there's one problem-Ian's changed. In a moment of weakness during that agonizing year apart, Ian cheated... with a vampire. Now Ian himself is a vampire, and a devastated, furious Levi wants nothing to do with him.

That is until he learns his clan wants Ian brought to justice for desecrating their most sacred ritual. If they find him, they'll learn he's a vampire, and kill him. Afraid for Ian's safety, Levi rushes to find him.

Darius, the vampire who converted Ian, tries to take him someplace safe, but when Levi catches up, all hell breaks loose. Now Ian's on the run with a dead wolf's blood on his hands, and the only way Levi or Darius are going to get near him is to work together.

They need to get to him before the rest of the clan... assuming they don't kill each other first.

I actually got this book about a year ago, and was just now able to sit down and read it.  It was a no-brainer for me to pick it up…an M/M vampire/werewolf story by an author I already like, with plenty of suspense to boot?  Yep, a definite no-brainer.

When the book starts, there’s some past events that have already happened to set up the situation Levi and Ian are in.  This is quickly explained though, but even so it did have me a bit off kilter at the beginning—that’s a personal thing, I’m just not fond of being dropped into an already happening situation like that when I first open a book.  But one thing the opening did so it start me off in a vat of tension and suspense all ready to go.

To be honest, as the story unfolds it was hard to see how Levi and Ian could reconcile things between them given what Ian did while they were apart.  But as you might expect, things are not always what they seem.  And as Levi and Darius go looking for Ian (along with Levi’s best friend Serena), things become even more complicated as the tension and animosity between Levi and Darius builds.

Some more honesty—after the things that happen once that animosity spills over I began to have mixed feelings (bordering on serious doubts) about where any relationship in this story could head.  But again—not everything is cut and dried, and what you might expect to happen or not happen may sometimes seem obvious and at other times…not so much.  This did serve to keep me on my toes not knowing what to expect, while at the same time hoping things would work out for Levi, Ian, and Darius.

The suspense was constant, the sex was scorching, and the ending will have you on the hook—and yes, that means there’s plenty of unfinished business a characters are on the run.  So, if you decide to give this one a try just keep in mind that it’s the first in a trilogy and you’re going to be left hanging at the end of this story.  Bonus?  Selena is absolutely awesome.

Cliffhangers and the pre-warned cheating aside, I’m intrigued to see where this series will go because I did come to care for all three men.  Overall this book was between 3.5-4 stars for me, and I think if you’re a fan of M/M paranormal romance this one will pique your interest like it did for me. Just make sure you go into it knowing it’s going to leave you hanging and that there is some cheating, though the circumstances may help with that aspect.  This story is for readers 18+ for adult language and sexual content.

L.A. Witt is an abnormal M/M romance writer who has finally been released from the purgatorial corn maze of Omaha, Nebraska, and now spends her time on the southwestern coast of Spain. In between wondering how she didn't lose her mind in Omaha, she explores the country with her husband, several clairvoyant hamsters, and an ever-growing herd of rabid plot bunnies. She also has substantially more time on her hands these days, as she has recruited a small army of mercenaries to search South America for her nemesis, romance author Lauren Gallagher, but don't tell Lauren. And definitely don't tell Lori A. Witt or Ann Gallagher. Neither of those twits can keep their mouths shut...

May 9 - Making It Happen