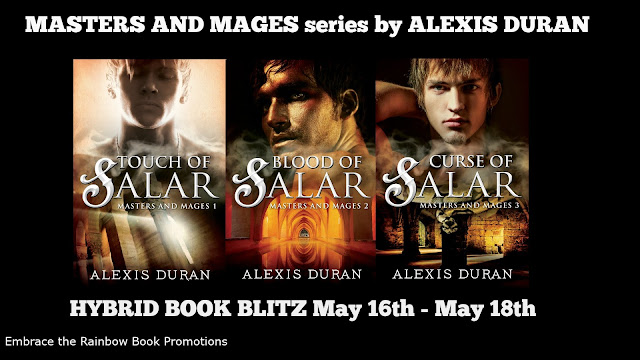 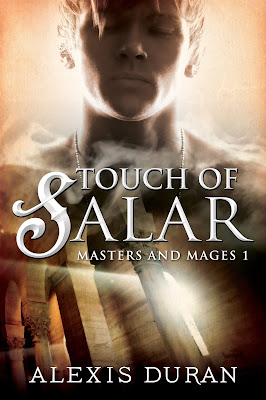 In a world ruled by tyrannical kings and fickle gods, the young monk M'lan finds himself at the center of royal intrigue as his healing powers attract the attention of his superiors. When he learns the handsome warrior whose body he’s tending to is not only a noble, but a king's assassin, any attachment to him might prove fatal. Despite the danger, he can't stop himself from falling in love. Can he risk the abandon of passion when a slip of the tongue might force his lover to execute him?

Major Jamil Jarka comes to the temple with one intention—heal his wounds so he can return to the fight against the rebellion. When the monk assigned to him turns out to be stunningly attractive, he sees this as a pleasant distraction, no more. But soon he finds himself becoming obsessed with M'lan and is torn between the fear of betrayal and the lure of love.

Sinister forces strive to turn the monk and the warrior against each other—a conflict neither will survive if they cannot trust their lives to love and the healing power of Salar.

EXCERPT from Touch of Salar

Jamil strode through the cool temple corridors and noted that his hamstring had loosened and there was no sensation of a catch as he walked. He’d had the symptoms since that day fourteen passages ago when his instructor had struck him down. Maybe there was something to this healing-energy business after all. His mood felt lighter than it had in ages as he entered the treatment room, once again awash with the amber tones of dawn.

The monk M’lan stood just out of reach of the sun’s rays, head bowed. Strands of blond hair glinted as a gentle breeze stirred them. He did not react as Jamil entered, and he kept his eyes down, as was proper. This gave Jamil a chance to observe him more closely. The monk had been in his thoughts since the other morning, as a constant irritation and source of pointless distraction. All harmless enough, though time moved ever slower as he waited impatiently to feel the monk’s hands on him again.

Today the monk’s face was expressionless, a mask of inner peace and outward aloofness. Probably the sensual impact of the treatment was an inadvertent side effect. Slightly disappointed, Jamil wondered if he could cast a ripple across the smooth facade.

“Greetings of the dawn, M’lan,” Jamil said. He was rewarded with a quick, surprised look, a flash of umber eyes that became cold and distant as they lit on Jamil’s smile.

With eyes down again, the monk asked, “How are you feeling, Major?”

“Sore. You did hurt me, as promised. But that old sword wound has ceased to bother me, so it was worth it. Maybe today you can heal my hand.” He held out his injured right hand and tried to flex the fingers. They bent reluctantly, and he winced as he tried to close them farther.

“That, Major, will take time. As I said, we must start at the surface and work our way down.”

“That seems backward to me. The sword wound on my leg happened when I was a lad. This is fresh.”

“It is the depth of the injury, not the age, that counts.”

“You’re the expert,” Jamil conceded. He let his robe drop and lay again on the table, determined this time to relax and not fight whatever sensations came, as they appeared to aid his healing.

Again a charge jolted him as M’lan laid hands on him, and then a warm tingling sensation along every nerve in his skin as fingers slid, smoothed, and dug into the seemingly endless knots in his muscles. Today the treatment was more businesslike, though the monk’s touch was pleasant and, in an odd way, comforting. Jamil felt like a pet cat being stroked by an attentive master. Master.

This image made him tense up somewhat. If he relaxed too much, the monk might gain the upper hand. That was ridiculous, but Jamil had rarely allowed anyone full control of his body. It seemed to him that they’d both decided to retreat from the dangerous territories they’d so briefly touched on the previous day. 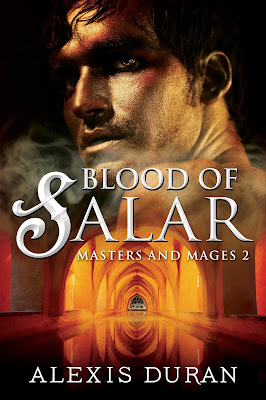 M’lan, headmaster of the order of Ka’alar, and Jamil Jarka, king’s assassin, find their impossible love challenged to the utmost as a rebellion sweeps them apart, sending Jamil on a dangerous mission to assassinate the rebel leader, General Charvat. Unknown to anyone, Charvat is on his way to the temple to exploit the headmaster’s magical abilities.

When the rebel army arrives, M’lan is thrust into a struggle against political and personal dominance as Charvat attempts to break his resistance. Violence and death mount, awakening within M’lan both the powers of destruction and the desire for revenge.

On the trail of his prey, Jamil begins to question his devotion to M’lan as his once innocent lover transforms into a mage and invades the assassin’s thoughts and dreams. The closer Jamil draws to M’lan, the more he puts his life and his very soul at risk. Jamil soon realizes that his lover might prove to be more deadly than the man he was sent to kill.

A final confrontation between assassin and monk might destroy them both, but Jamil is relentless in his determination to rescue M’lan, knowing that only his love can master the mage.

Exclusive Excerpt from Blood of Salar

He entered the chapel through a side door and scanned the scene. About a dozen soldiers were taking anything movable from the altar and the alcoves around it. There wasn’t much of value in the place, but along with a pair of gold cups and a crystal candlestick, they’d discovered the gemstones embedded in the mosaics behind the altar and were pounding at them with axes and prying with daggers.

For the gain of a few coins, the rebels were vandalizing artwork a thousand years old. M’lan wished he wore his blue robes, for these simple countrymen could be counted on to hold deep superstitions, if not faith. The sight of a spiritual authority figure might have brought them to their senses.

He searched the dimly lit space for Sheylin but could make out only the bulky, lumbering bodies of the defilers. Then she cried out again, and M’lan spotted her in one of the alcoves. Raffe held her by the wrists and had forced her to her knees. The captain backhanded her across the face and then went down on one knee beside her limp body.

Thought and calculation dropped away from M’lan like a stone he’d been uselessly holding. This was Ka’alar’s place. Ka’alar would deal with these men.

He walked toward the great stone fountain carved in the shape of the serpent god. One of the men stood on the lip of the pool, trying to reach the line of small emeralds embedded in Ka’alar’s throat.

What utter stupidity, M’lan thought. He recalled the simple magic trick he’d used to expose Abbess Renee, when he’d made it appear as if the statue had come to life. He had both hands on Ka’alar’s smooth side before anyone noticed him.

“Hey there!” shouted the man picking away at the statue with a blunt knife. “Come to join the fun?” He leaned jauntily against the neck of the statue with one palm, the other hand on his hip. “Hey, Raffe, look who’s come out to play!”

With obvious irritation, Raffe tore his attention away from his victim. His eyes flashed with torrid passion when he spotted M’lan. He stood and strode across the nave.

“Charvat will be happy to see you,” he said, voice husky.

M’lan stared at him without fear. More of the looters grew interested in what was occurring and gathered around.

“Ka’alar hungers for souls. You are deserving of his wrath, even more than Charvat.”

Raffe laughed. “Your pagan water spirit is dead and buried. Salar rules all.”

“Salar will not be pleased to hear his name spoken by a foul wretch such as you.”

Raffe stopped laughing and pulled his dagger. “Charvat may not get much fun out of you once I’m finished,” he snarled.

M’lan took a deep breath and closed his eyes. “Ka’alar, I call upon you to help me protect your house.” He focused on pulling the magical energy of the sacred space from its stones, but he needn’t have bothered. As if coiled in his blood waiting to strike, a dark, fluid power surged through his veins and poured into the statue.

The marble statue began to twist beneath M’lan’s hands. The smooth, cool scales of the mighty serpent caressed his skin as they slid past. As if the very god flowed out of him, M’lan felt the snake to be an extension of himself.

With a sharp exhalation, he said, “Avenge her!” 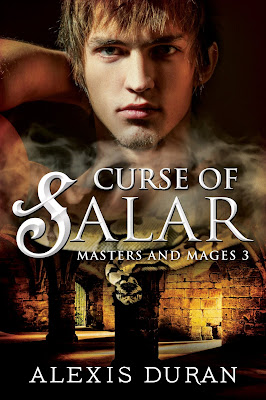 In the kingdom of Jahar, the rule of mages has been overthrown. Prince Dezra Luzan is being held prisoner in the ancestral palace. In order to stay alive, he pretends to be a drug-addicted wastrel, trusting no one, not even his lovers. Into his lonely existence comes a man who should be his sworn enemy; Captain Rayn Nevar. Dezra is irresistibly drawn to the rough soldier and his longing for a simple sexual encounter quickly builds into a dangerous obsession.

Captain Rayn Nevar knows he should stay away from Prince Dezra, but his desire for the beautiful young man overrides all common sense. Rayn soon finds himself protecting the prince from a plot to destroy the last of the mages. When treachery leads to Dezra's escape, he is at last free to unlock his long repressed powers. Only the arrival of a mysterious monk with powers greater than Dezra's stops the prince from using sorcery to destroy all who stand in his way, including Rayn.

As Jahar edges toward another war between masters and mages, Rayn must question his devotion to his increasingly deadly lover while Dezra must decide if ultimate power is worth the ultimate sacrifice.

Find Masters and Mages on Goodreads

Alexis Duran was born and raised in the Pacific Northwest. At the University of Oregon, her fascination with people and relationships led her to major in Sociology, but her main love has always been creative writing. She's worked in museums, finance, film production and for several performing arts organizations. Her favorite job so far has been inventorying the collection of a haunted Victorian Mansion. She is the author of the Masters and Mages and Edge of Night m/m fantasy series as well as several stand-alone romances. Her fiction has won several awards including the Rupert Hughes Award from the Maui Writers Conference and First Runner Up from Love Romances Cafe. She lives with one dog and four and a half cats. She is always working on the next novel and has several new ideas brewing at all times.