Review, Excerpt & Giveaway: NOT ALL CHOCOLATE AND CUCKOO CLOCKS by Rebecca Cohen 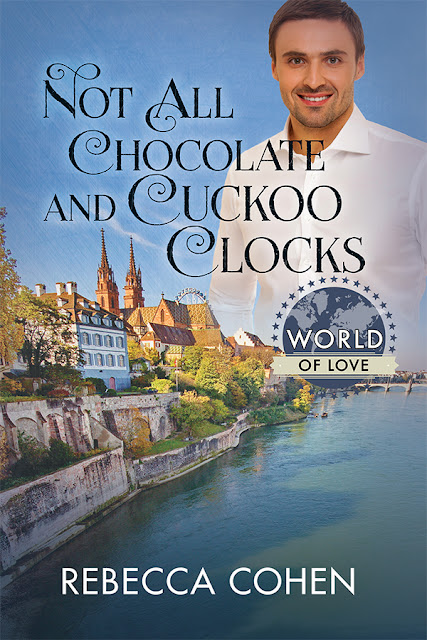 Neither of them wants to fall in love, but getting exactly what they don't want might be the best thing to ever happen to them.

Mark hopes his boredom with his current job will be alleviated by a short stint in Basel, Switzerland. When he meets Steffen, who struck out on his own from an old-money family to establish an IT firm, Mark expects some fun, great sex, and a clean break when his job is done. The arrangement is perfect for Steffen, who has been content with casual after a betrayal-and has a taste for British men after attending university in the UK. But as they explore the city's rich history and traditions, Mark begins to see Steffen as much more than a tour guide with benefits. If he isn't careful, the trip meant to break the lull in his career might end up breaking his heart instead... 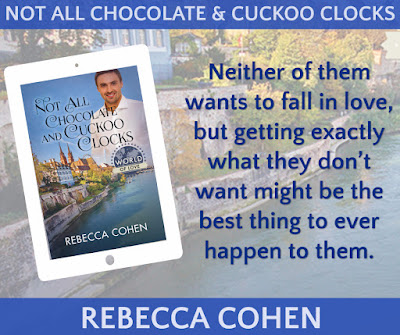 
Mark had two and a half months left in Basel, and the idea of several weeks of no strings attached sex was as exhilarating as it was nerve-racking. It was the kind of offer his younger self would’ve jumped at—but he wasn’t that man anymore, and he wasn’t sure he could be again. “I wouldn’t say reticence.”

“No? Then perhaps my English is rusty, as I do not have a better word for it.”

“Okay, you’ve a point. But you have to understand that it’s not every day that an attractive man states so bluntly that he wants to f*ck me.”

“Then the men in the UK are stupid. Or you are not mixing with the right type of men.”

Steffen wasn’t completely wrong. The truth was he had spent his university days shagging about, enjoying the writhing mass of bodies in the clubs and gay bars. At the time he’d loved the anonymous and varied encounters, but then he’d decided he needed to grow up and join the adult world. Suit, tie, steady job, and long-term boyfriend, with cozy Friday nights in and dinners for two, not body shots and glory holes. “I gave up clubbing after university. These days I don’t go to the type of places where men go to keep things casual.”

Steffen seemed to consider his response before replying. “So it would be the fleeting nature of our encounters that would bother you?”

“Possibly. I suppose my needs changed, and I wanted more than the emptiness of another hollow shag.” It felt like an important admission, something he’d never talked about before, but it needed to be said to explain why he wasn’t dragging Steffen out of the restaurant and back to his lodgings. “The only one-night stand I’ve had in the last ten years turned into a yearlong relationship. I hadn’t planned it. It just sort of happened.”

Steffen waved a piece of veal in his direction. “I cannot give you permanence.”

“I’m not asking for it,” Mark added quickly, and he meant it.

“What I am hearing is you are not against the theory of enjoying a few weeks of fun before you return home. But equally, I am not convinced you are fully in favor either. If you do not wish this, we will finish our dinner, shake hands, and depart as friends. You are not beholden, either way.”

Steffen wasn’t offering an anonymous shag. It wasn’t thanks for the f*ck, now f*ck off, but instead something in the middle. Mark’s love life had been in the doldrums since John left, ostensibly because Mark’s job had eaten away any free time and John had decided enough was enough. He didn’t have any more free time now, and that wasn’t going to change, which would no doubt annoy any new boyfriend, so why not take Steffen up on his offer? He picked up his wine and took a sip of liquid courage. “Throw in being my personal tour guide of the city and I’m in.”

Steffen offered up his wineglass in a toast. “I plan to give Basel Tourism Office a run for their money.”

Mark copied and took a sip of his wine. Never had agreeing to sleep with someone felt so formal, borderline making a business deal. But somehow it didn’t feel wrong; instead it was as though he was entering something that didn’t require constant renegotiation. He would know where he stood with Steffen. Sex, hopefully very good sex, if he was lucky, and he suspected Steffen’s experience might make up for his own rusty skills and help polish them up nicely. “Let’s hope I don’t find you lacking—I’d hate to leave a terrible review on TripAdvisor.”

“Oh, there are plenty of people who can attest to my abilities.” Steffen waggled his eyebrows. “I will give you my personal guarantee that you will not find me wanting—in any capacity.”

Mark skewered the last piece of meat. “You’re certainly not lacking in confidence.”

“Have you only just noticed?”

This is a fun story that goes from “let’s be friends with benefits” to a whole lot more once the characters realize exactly how they really feel about each other.  Their relationship is kind of a whirlwind, set in the city of Basel, Switzerland which is intimately detailed in the story.  Mark and Steffen are scorching hot together—chemistry is certainly no problem for these two, and that spills over from the physical to a lot more…no matter how much they tell themselves it shouldn’t.

The friends-with-benefits to regular couple transition actually didn’t feel rushed to me, even though Mark’s initial stint in Basel isn’t too long.  That might have been because the intensity of things between them was pretty strong, so the two of them being together seemed quite natural from the start.  Steffen’s no-nonsense, straightforward attitude is refreshing and paints him as a strong, alpha character right away which was something I really liked about him.

There are a lot of in-depth details provided not just about the city of Basel but also of the cultural aspects, especially the Fasnacht celebration.  For me, the level of detail is quite a bit more than I prefer—and while as a traveler these types of intricate details would fascinate me if I were visiting a location, as a reader it did detract a little bit from the story itself and the romance between Mark and Steffen.

Overall, this book was still a 4-star read for me, and one I would recommend to others in this genre.  This story is strictly for readers 18+ for adult language and sexual content.

Rebecca Cohen is a Brit abroad. Having swapped the Thames for the Rhine, she has left London behind and now lives with her husband and young son in Basel, Switzerland. She can often be found with a pen in one hand and a cup of Darjeeling in the other.