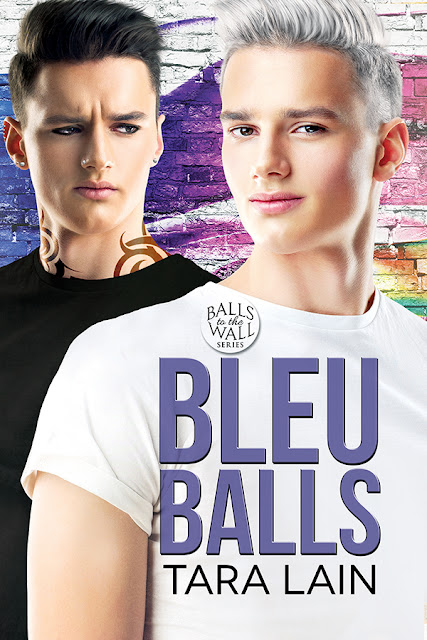 Double trouble. The McMillan twins, Robin and Bobby, are renowned for their talents—both as fine artists and for thrilling the various men who catch their eyes. As different in style and personality as their DNA is identical, they’re nonetheless best friends who divide and conquer, with Robin doing the serious painting and Bobby adding the sunny salesmanship.

But when their most important client decides Bobby must wield the paintbrush, the brothers revert to childhood tactics and switch places. Then along comes Micah, a handsome doctor who’s attracted to Bobby but invites Robin out to try to please his homophobic brother, and Paolo, the pain-in-the-butt client who thinks he’s wooing Bobby when he’s actually after Robin. Paolo harbors his own hidden pain that weirdly intersects with Robin’s, but pride and privacy conspire to produce what will either be a masterpiece—or end up as Dogs Playing Poker. 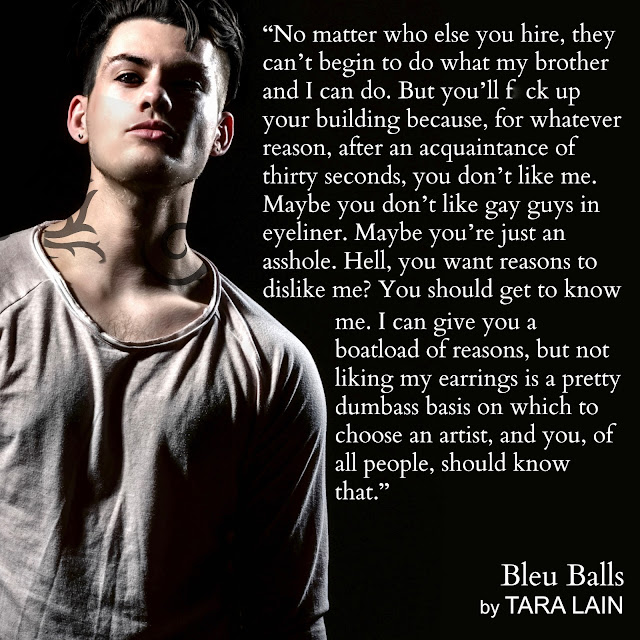 Bobby looked up at the attractive guy who’d been eyeing him for the last hour. “Oh, I don’t know—”

“Come on, Bobby, go. Go!” Rodney pushed Bobby out of the chair.

He smiled, but it took some effort. “Okay, so I guess yes.” He followed the man’s trim ass in nice summer-wool slacks toward the tiny dance floor in the lounge at the Rose. Jerry and his honey, Mick, were already dancing. The two big firefighters took up more than their share of the available boogie space, but they looked so happy it made Bobby tear up.

The guy turned and pulled Bobby into his arms. Clearly he intended to lead. Okay with me. “I’m Aaron, by the way.” The guy had nice hazel eyes and carefully brushed brown hair.

He started a not-very-complex box step. “You’re an artist, aren’t you?”

“I saw you at the Sawdust. I really like your stuff. Very unique.”

“Stockbroker. Let me know if you need any investment tips.”

Bobby laughed. “Believe me, artists need tips on keeping their rent paid, although I’ll admit, we’re having a good summer.”

“Me and my brother. We paint together.”

Bobby looked up at Aaron and followed his line of sight to the door—where, sure enough, Robin had just walked in. Bobby waggled his fingers and called over the piped-in music. “Hi, dear.”

Aaron said, “But you two are identical.”

Bobby felt Aaron react—somewhere between a jerk and a laugh.

“What?” Bobby looked up into a face that had been pleasant and now leered.

“F*ck, why didn’t you tell me you were Double Trouble?”

Bobby frowned. “Was I supposed to?”

“Sh*t, yes. I mean, what does it take to get some backroom action from you two? Hell, I can pay.”

“Pay?” Bobby pressed his hands against Aaron’s chest and shoved. “Get your hands off me, you pervert.”

Bobby turned his tail and flipped it back to the table—but his insides rolled with anger and nausea.

Robin saw his face and sprang up. “What’s wrong? What happened?”

“Nothing I don’t deserve. He saw you and realized we were Double Trouble. He said he’d like to pay us.” Robin clenched his fists, but Bobby put a hand on his arm. “You can’t blame him for getting the wrong idea.”

“Oh? Watch me.” Robin stared pugnaciously across the dance floor.

This series has been kind of hit-or-miss for me with some of the books being great reads and others being take ‘em or leave ‘em.  Bleu Balls I was kind of on the fence for a majority of the book.  While I loved Bobby and Robin’s characters, they didn’t quite meet my expectations based on the glimpses I had of them previously in the series.  As for their love interests in this story, Micah was wonderful…but Paolo felt standoffish and I just couldn’t warm up to him at all.

With the overall story being a whole take on the twin thing, it sets the guys up for the typical twin moments—swapping places, potential mix-ups and such—but for me these situations made it harder for me to connect with the characters, and made the couplings feel a bit forced.  Even once Bobby and Robin were matched up with the men with whom they truly belonged, I still didn’t feel a genuine “click” with each of the couples.  That feeling was more prevalent with Robin and Paolo, mostly due to both of them having personalities that were similar and not the kind that are warm and fuzzy…which resulted in them clashing more often than not.  Bobby and Micah were a much better match to me.

One thing that I did really love was how protective Robin was of Bobby.  The two of them share a special bond as twins in the first place, but Robin always puts Bobby first.  With the two of them used to sharing everything with each other, when they stop doing so when it comes to their new relationships it introduces friction into the story.

Even now that I’ve finished the book, I still don’t have a strong feeling either way about it.  I did enjoy reading it, and fans of the series will like getting Bobby and Robin’s story.  I think if Paolo’s character was easier to warm up to, and if he and Robin had less conflicting personalities, then I would have felt better about their pairing.

This story is for readers 18+ for adult language and sexual content.


The Balls to the Wall Series 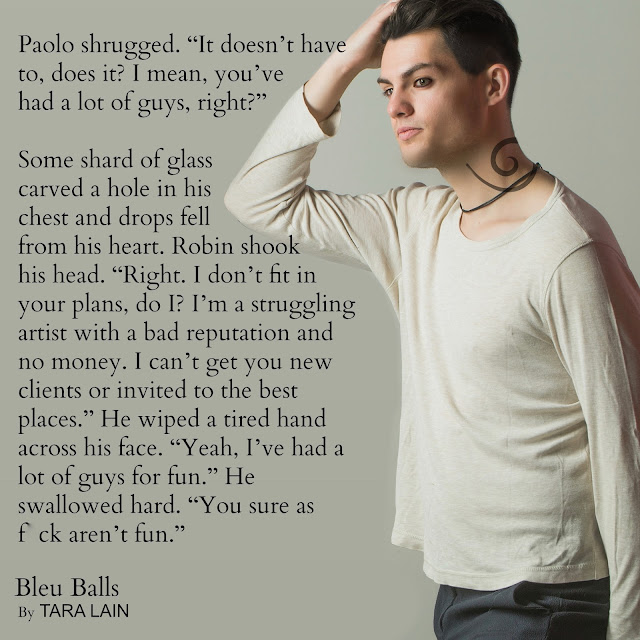 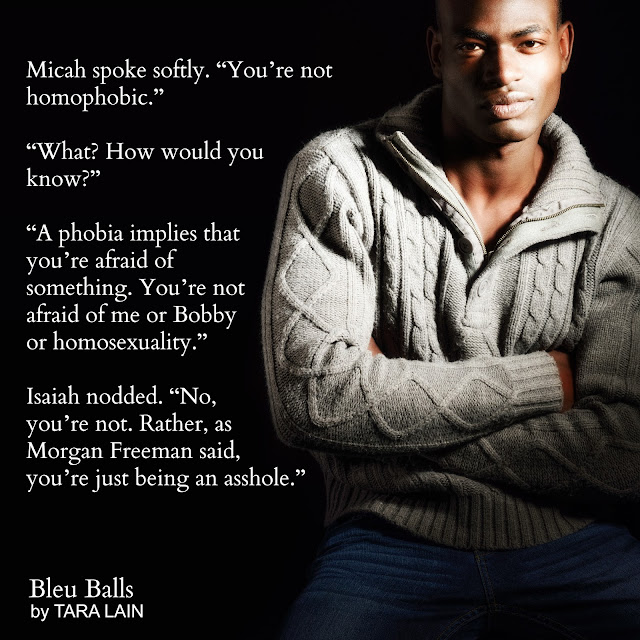 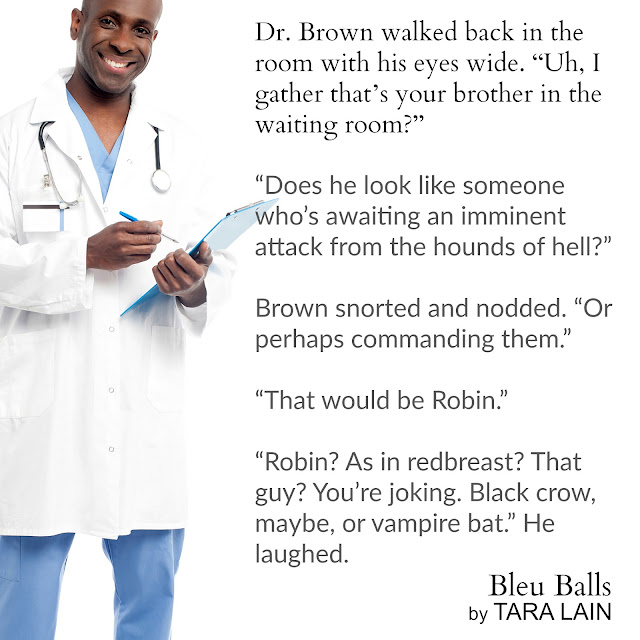 Posted by Making it Happen at 4:45 AM