Release-Excerpts: THE EXCHANGE SERIES: THE COMPLETE COLLECTION by M.B. Feeney

The Exchange Series: The Complete Collection
by M.B. Feeney 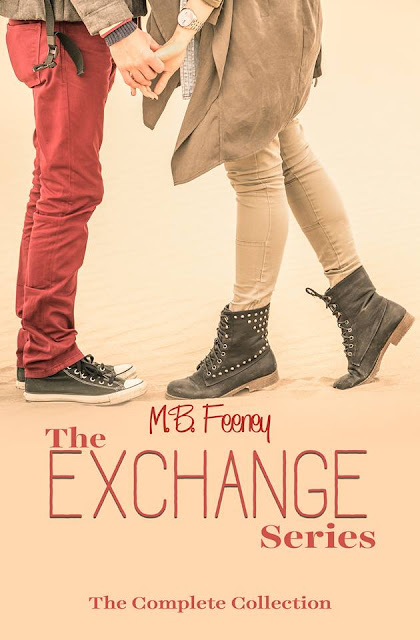 Dear Diary
Born and bred in the UK, Holly is getting the chance of a lifetime—six weeks abroad. The Kings, a host family in the US, have invited her to stay with them and get a chance to experience life as an American. When she discovers that the King family includes two teenage boys, will she be glad she came or ready to hightail it back across the pond?

Reluctance
Aiden King's heart has been broken, and he's taking his anger out on his brother, Tyler.

Can he, with the help of his High School Guidance Counsellor, work through his problems.

Repentance
Tyler King has moved away from his family in order to help himself move on from the mistakes he made in High School.

Dear John
Ellie King has a plan. Do well in her Senior Year at High School before going to study in London, England. That’s all she wants in her immediate future.

Writing to John Davids not only cements her desire to study in the UK, but gives her more if a reason to leave her family in the US.

So, Ms. “It’s MIZZ not MISS” Jones gave me this journal. Apparently writing my feelings down will help me deal with my ‘anger issues’ and the ‘depression’ I’ve been suffering since Jessie ended things between us.

I admit, I am angry, and have been for two months, but I’m not depressed. Yeah, I was hurt and shit, but now I’m just angry. All the time; an emotion I’m not used to feeling so much. Up until now, I’ve never done the ‘angry’ stuff; never even knew I had a temper as such.

She’s ‘advised’ me to start at the beginning as much as I can with these dumb entries. I don’t want to do it, but as we have to read them together at our weekly meetings, I have no choice. At least one entry a day. . . This whole thing sucks ass.

There’s no point starting at the very beginning, though; back then everything was good; real good. No, I think my seventeenth birthday is where I need to start this thing. . .

When his mom first told him a British chick was coming to stay with them, Tyler had been like a shark tasting fresh blood. He was going to charm her into his bed, then let her head back home, he hadn’t forseen her coming back thanks to his brother knocking her up. What choice did any of them have but to have her in the house, this time permanently?

“Hey, where d’you go just then?” Anna’s question brought his attention back to the present. Once again he could feel the warm sand on his bare feet and her small form in his arms. He smiled down at her.

“Sorry, I was thinking about home.” He bent to capture her lips with his own. The kiss making his heart rate pick up as every other kiss they’d shared had done. When he boarded the plane back in Arizona, he’d never expected much to happen on his vacation. He’d planned on lounging on the beach during the day, and drinking in bars in the evenings, but as he was checking into his hotel, he’d spotted Anna struggling with her bags and from the moment he’d helped her into the elevator, his plans had changed.

Plans that had never included falling in love with someone in a two week period. 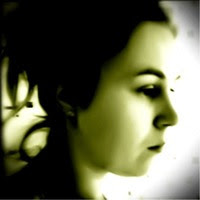 M. B. Feeney is an army brat who finally settled down in Birmingham, UK with her other half, two kids and a dog. She often procrastinates by listening to music of all genres and trying to get ‘just one more paragraph’ written on whichever WIP is open; she is also a serious doodler and chocoholic. Writing has been her one true love ever since she could spell, and publishing is the final culmination of her hard work and ambition.

Her publishing career began with two novellas, and she currently has multiple projects under way, in the hopes that her portfolio of what have been described as “everyday love stories for everyday people” will continue to grow. Always having something on the go can often lead to block which eventually gets dissolved by good music and an even better book.

Her main reason for writing is to not only give her readers enjoyment, but also to create a story and characters that stay with readers long after the book is finished, and possibly make someone stop and think “what if . . . ”