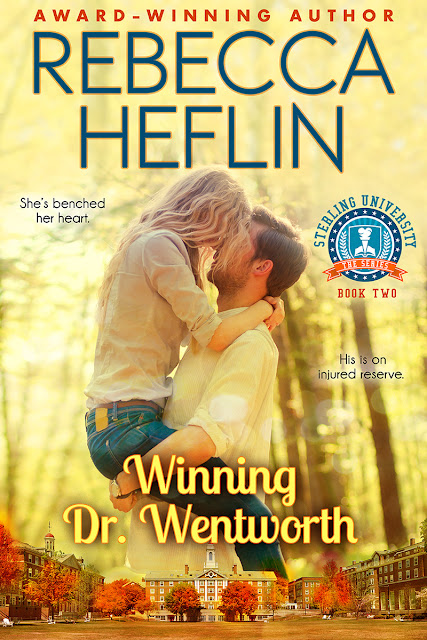 She’s benched her heart. His is on the injured reserve.
Burned-out and broken-hearted statistics professor, Dr. Shelby Wentworth, returns to her hometown determined to escape the disgrace of a nasty divorce, shake off the taint of her ruined career, and start over. This time she swears she’ll live by the rule ‘don’t get your honey where you get your money.’ But an unexpected reunion with her former high school crush, not only makes her rethink her decision to return home, but also tempts her to break her one rule.
After a career-ending injury and his own disheartening divorce, former NFL quarterback, Nash Taylor, returned to his hometown to become the head coach of the Sterling University Bobcats. When his childhood best friend literally runs into him in the faculty parking lot, he thinks maybe it’s time to put his heart back in the game.
Nash, in the hunt for a division championship, enlists the number-crunching Shelby as his secret weapon. But Nash’s plan to help Shelby regain not only her confidence, but also her financial security backfires and lands Shelby in the same hot water that brought her home in the first place.
Will Shelby let the past dictate the future, or will Nash win her heart on his way to winning the championship?

Shelby Wentworth tossed her backpack across the console onto the passenger seat of her car then dropped into the driver’s seat and slammed the door shut. Closing her eyes, she took a deep, cleansing breath. At least, she tried to take a deep breath. After the contentious conversation with her ex-husband, the pain in her chest made it difficult to breathe.

Would she ever be able to leave the past behind and focus on rebuilding her career? Her life?

Pressing a hand to her sternum, she counted to five as she inhaled, held her breath for another five-count, then exhaled. The breathing exercise slowed her racing heart and calmed her. “That's better,” she murmured.

Starting the car, she threw it into reverse and backed out of her spot in Sterling University’s faculty parking lot.

And right into a solid object.

The sickening crunch set her heart racing at warp speed this time.

Glancing behind her in horror, all she saw was a big gray behemoth.

With trembling hands, she put the car in park and jumped out to find a late-model dark gray Suburban, it’s rear passenger-side fender crumpled, but little damage otherwise. Her old Honda Civic, on the other hand, hadn’t stood a chance against the tank she’d backed into. The trunk was crumpled, and her bumper hung off the passenger side in a lopsided grimace.

Out of the corner of her eye, she saw a tall, athletic man stride around the back of the SUV.

Fear swamped her, and she covered her mouth with both hands. “Oh my god, I’m so sorry! Are you okay?” Bracing herself for the tirade, she backed away from him, holding her hands out in front of her.

What? That’s it. No yelling? No name-calling? No threats?

He adjusted his red Sterling Bobcats ball cap, leaning down to assess the situation then scratched his chin and stood up. “Okay. Maybe a little harm done,” he said with an easy smile. “Question is, are you okay?” He removed the aviator sunglasses he wore and directed his concerned gaze right at her.

“Nash?” The instant she saw those electric blue eyes, she recognized him. Butterflies took flight in her stomach, and not from fear this time.

He’d been powerfully built in high school, but that had been just a preview to the powerfully built man he would become. And although he’d left the NFL, he hadn’t lost his quarterback build.

They hadn’t seen each other since the day they’d graduated high school. But, despite her broken heart, she’d secretly followed both his college and pro football careers.

She’d been watching the day of the NFL draft, five years earlier, when the Denver Broncos called his name and he’d gone down on one knee and proposed to his college sweetheart, Stephanie Cummings, further adding to her heartbreak.

She’d also been watching the Broncos versus the Raiders the day he’d taken the hit that had ended his career.

And finally, she’d witnessed the press conference when Nash Taylor stood, tears in his eyes, as he gave up the sport he loved at the young age of twenty-seven, his beauty-queen wife noticeably absent.

It wasn’t long after that news of their divorce hit the headlines.

“Shelby?” he asked, his surprise evident in his expression.

“You remember me?” she couldn’t help asking.

“Of course.” He frowned. “Why wouldn’t I remember you? We were best friends back in the day.”

Were being the operative term.

A flush crept up her neck and into her face as she recalled her first kiss in the backseat of their best friend’s car. But the flush turned to heartache at the memory of Nash’s later betrayal.

“I thought your mom moved. Are you here visiting the university?” he asked.

“No. I, uh, I took an assistant professor position in the College of Arts and Sciences.” A step down for her, but she’d been lucky to get even that. She toed a piece of her car’s bumper that had fallen off in the collision.

“No kidding?” He rocked back on his heels. “How long have you been back?”

“I moved two weeks ago. I’m surprised I haven’t seen you before now.” She knew he’d moved back to his hometown of Sterling after he’d left the NFL and became the head coach of the newly formed Bobcats football team. It was the one of the reasons she’d hesitated in taking a job she’d so desperately needed. Being in the same town—and a small one at that—as Nash would be a constant reminder that she’d never really gotten over her high school crush.

“I’ve been . . . out of town.” He shoved his hands into the front pockets of his jeans.

“Oh.” She nodded as if she understood, but really she didn’t. Clearly there was more to that statement. An awkward silence fell.

“Look, I know the new police chief. Let me give him a call so we’ll have a report for the insurance companies.” He pulled a smartphone from his back pocket.

“Oh, but—” She’d really rather just pay for the damage than deal with the insurance . . . and have them raise her already-too-high rate. “Can we just handle it between ourselves? Of course I’ll pay for the repairs.”

“You sure about that?” He paused in tapping out the number.

“Yeah.” A nervous laugh escaped. She’d just add it to the long list of bills she currently struggled to pay. Maybe Nash would take it in installments for old times’ sake. “Why deal with all that paperwork?”

Shelby wrapped her arms around herself, the body language unmistakable. She nodded. “I’ll get my insurance information.” She turned back to her car.

“No. I mean I can’t let you pay out of pocket. And don’t worry about the insurance. The deductible is probably more than what it would cost to repair the damage.” He could think of a better way for her to repay him. “How about you buy me dinner instead and we’ll call it even?”

She looked good, Nash thought. Better than good. The pretty tomboy had grown into a beautiful woman. She’d cut the long, light brown hair that as a teenager she’d worn almost exclusively in a ponytail, so that it just touched her shoulders, and she’d filled out in all the right places.

The shy smile was still there, although he didn’t miss the sadness in her amber eyes. Or the fear when he’d first approached her.

“What?” Confusion skittered across her face.

No surprise there, considering he was just as confused by his offer as she was.

He grinned. “You know, the meal you have at the end of the day? In the South we call it supper, in case you’ve forgotten.”

She’d lost some of that innocence he’d found so appealing so many years ago. Along with her accent. Guess that’s what happened when you received an Ivy League education.

She looked away and then back at him. Her eyes narrowed. “I just nailed the back end of your car, and you want me to have dinner with you?”

He had an all-consuming urge to gather her in and hold her close until the tension in her shoulders, and the sadness and fear in her eyes, retreated. But he doubted she would accept his sympathy. After they’d both left for college, he’d tried to hold onto their friendship despite the distance, but she never answered his emails or phone calls.

He knew he’d hurt her in high school when he took Leandra Lucas to prom instead of her, but he’d made a promise to a friend, and he didn’t break promises.

“Yeah, why not? Catch up. It’s been, what, eleven years since I saw you?” The day they’d graduated in fact. Him with decent grades and a football scholarship, and her as class Valedictorian. She’d headed off to Brown University for an accelerated program in mathematics the following week, and he hadn’t laid eyes on her since. Not even for their ten-year reunion last year.

She bit her lower lip then drew it into her mouth, and his eyes locked on like a heat-seeking missile. The memory of the sweet, hot kiss they’d shared in the back seat of Ethan's 1993 Ford Mustang assaulted him.

She was probably right. He just nodded. Clearly, she hadn’t forgiven him for what he’d done. Not that he could really blame her. He should have been upfront with her then. She would have understood. Maybe.
“I should probably give you my number so you can get me the repair bills for your car if you change your mind,” she said, returning his attention to the present.

“Right.” She stepped close and a light, clean scent tickled his nose. Like lemons, only sweeter. He tapped the number into his phone as she rattled it off to him, all the while wondering whether she wore perfume or if it was her shampoo. “But I won’t. Change my mind, I mean.”

“Okay. Well. Again, I’m really sorry about . . .” Her voice trailed off as she indicated the fender-bender.

“It’s just a car. Nobody got hurt, and that’s the important thing.”

“I’ll see you around.” Shelby rounded her car and climbed into the open driver’s side.

Realizing she couldn’t leave until he moved his car, he turned to do just that, but couldn’t help but wonder what twist of fate had brought Shelby Wentworth back into his life.

Rebecca Heflin is an award-winning author who has dreamed of writing romantic fiction since she was fifteen and her older sister snuck a copy of Kathleen Woodiwiss' Shanna to her and told her to read it. Rebecca writes women's fiction and contemporary romance. When not passionately pursuing her dream, Rebecca is busy with her day-job as a practicing attorney.
Rebecca is a member of Romance Writers of America (RWA), Florida Romance Writers, RWA Contemporary Romance, and Florida Writers Association. She and her mountain-climbing husband live at sea level in sunny Florida.