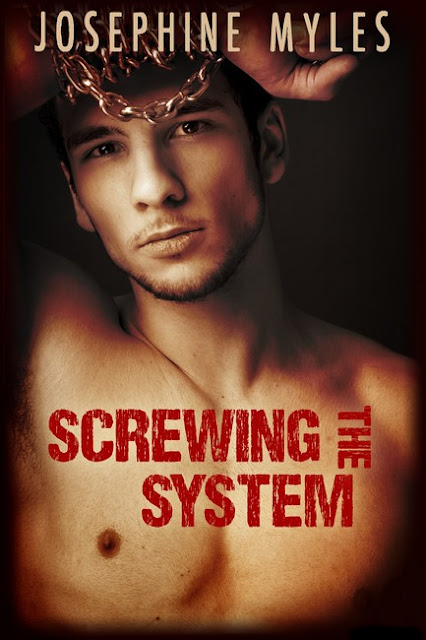 Forced to apply for a job he doesn't want, Cosmo Rawlins has only one aim in mind: fail the interview and get back to making music. But his attempt to shock the sexy, sharp-suited Alasdair Grant has a very different result.

Alasdair has more important things on his mind than training a novice sub, especially a rebellious bad boy like Cosmo. But there's something beneath the youngsterís bratty attitude that fascinates him.

As Alasdair takes Cosmo in hand-and for a wild ride on his Harley-he becomes obsessed with bending the young rocker to his will, both in and out of bed. But while Cosmo might enjoy the kink, he's not up for becoming Alasdair's household slave.

When Alasdair goes one demand too far, Cosmo is gone in a cloud of dust. Forcing Alasdair to admit that earning Cosmo's loyalty-and love-will involve the toughest challenge he's ever faced.


NB. This book is a re-release.


Cosmo crossed his ankle over his knee and began humming. It wasn’t deliberately to annoy the blonde chick behind the reception desk. No, he’d had this tune buzzing around in his head ever since waking, but what with having to come along to this interview for a piece-of-sh*t job, he hadn’t had a chance to get it down yet. That was why he couldn’t hold down regular employment, see? It wasn’t laziness or stupidity, no matter what his old teachers might have said. Nah, he was just one of those creative types. He’d told that to Irene—she was his advisor at the Jobcentre. He’d told her he was looking for jobs that would utilize his musical skills. She’d said, “In High Wycombe? Dream on, Cosmo,” and told him he had to put down a wider range of acceptable jobs or she’d bloody well do it for him.

In the end, she had started to arrange interviews for him, which explained why he was sitting here, waiting to be interrogated about his suitability as a “sanitary disposal operative”—in other words, the poor sod who had to go around emptying bins in ladies’ toilets.

The skinny bloke who’d gone in before him loped out of the shuttered office and hightailed it across the lobby to freedom. Cosmo sighed and popped a stick of gum into his mouth. Fresh breath, see? It looked like he was making an effort so he’d get brownie points, but chewing gum during an interview was guaranteed to piss off pretty much every manager out there. As was asking how many cigarette breaks you got per hour.

Cosmo stood and smoothed down his black drainpipe trousers. He even had a well-ironed shirt and tie on. Thing was, he’d discovered that on him, the smart clothes and grade-two haircut made him look less like a good little worker and more like a thug. He’d probably get a job as a bouncer if that was what he was going for—not that he had the intimidating build or anything, but he looked well hard, what with the couple of scars on his chin and the one across his eyebrow from fighting off angry closet cases, plus he could do a mean stare if he felt the need.

But he had other tricks up his sleeve too. Quite literally. Cosmo massaged his sore wrists and headed on into the boss man’s office, giving Blondie a huge grin on the way. She smiled back, all coy-like. Barking up the wrong tree there, love.

Mr. Grant, on the other hand… There was a tree he wouldn’t mind barking up. Or climbing up, more like. He was huge and had to be old enough to be his dad, which wasn’t actually all that old, seeing as how his dad was only fifteen when he got his fourteen-year-old excuse for a mother up the duff. But this wasn’t some fat old geezer with white hair bristling out of his nostrils. Mr. Grant wasn’t big like that. He was built like a bricklayer, all broad chest and shoulders bunched with powerful muscles. It was obvious, even with his body covered up by the fancy suit, he spent time down the gym.

“Cosmo Rawlins,” the boss-man said, holding out a huge hand, which swallowed up Cosmo’s in a warm and firm handshake. What a grip. Cosmo had all kinds of naughty thoughts about where else he’d like to feel a hand like that and wondered whether getting a boner in the interview would be something this Mr. Grant would report back to Irene. Best not take the chance. “I’m Alasdair Grant. Please take a seat.”

Usually these things were done across a desk, but Mr. Grant didn’t seem to need the prop to boost his ego and had a load of comfy chairs arranged around a giant coffee table at one end of his office. The man was clearly doing all right for himself. Cosmo could have fit the entire ground floor of his shared house in there and still had room to swing a cat in. Not that he believed in cruelty to animals or anything.

“Nice place you’ve got here,” Cosmo said as he settled into the chair indicated.

“Thanks. It’s taken me a decade to build this company up, but we’re now the largest sanitary services operation in the South East.”

Cosmo tried not to look too impressed, but it was bloody difficult not to when faced with the sight of Alasdair Grant seated across from him, like a stern George Clooney with that handsome face, cropped salt-and-pepper hair and designer stubble so thick it was bordering on beard territory. He had these sharp grey eyes fixed on Cosmo. It was unnerving, sitting there with the bloke looking at him like that.

Was Boss-man checking him out? Yes, definitely, but Cosmo was buggered if he could tell if it was purely a professional assessment or if there was a more salacious interest lurking in his gaze. Alasdair Grant didn’t have a wedding band, but Cosmo wasn’t going to read too much into that.

“So, Cosmo, has your advisor at the Jobcentre let you know exactly what the job entails?”

“Emptying rag bins in the ladies’ lavs, as I understand it.”

Boss-man gave this pained smile and leaned forward a little. Sh*t, it felt like he was looming over Cosmo, despite him being the other side of the coffee table. “That’s certainly an element of the work, but it’s a more responsible position than that. We provide a full replenishment service for all disposables, like paper towels and hand soap. We also empty and top-up the vending machines, so there’s a cash-handling element. You’d be in charge of one of our vehicles and acting as a frontline representative of Sanco Solutions at all times.”

Cosmo tuned out the words Boss-man was saying and just enjoyed the sound of his voice. There was this deep bass rumble to it that made him think those lungs must be huge, but that was overlaid with a melodic timbre not all that many speakers had, and there was a smooth, easy rhythm to his speech. Sh*t, he could listen to him for hours. Cosmo found himself tapping his foot and drumming his fingers along with his words. Gave him ideas for inserting a rap in the middle of the new song. Some UK Garage or Grime stylings, maybe. Would that work? The rest of the band would hate it. Rizzo especially, which made it doubly appealing.

That made him snap his head up. “What?”

“You looked like you were lost in music.” Boss-man stared pointedly down at his fingers.

“Oh, that. Sorry, it’s just habit. I’m a musician, see, and I can’t help it. I find inspiration everywhere.” Actually, this was good. Playing the flaky-musician card put off most employers, but he didn’t normally get a chance to until the bit at the end when they asked him if he had any questions.

“A musician? What do you play?”

“Guitar, and I sing too. I’m in a band. ScarDue, we’re called.” How much longer he’d be a member, he didn’t know. They were currently experiencing a bout of creative conflict. In other words, the rest of them were content playing cover versions of alt-metal hits in local pubs, whereas he wanted to experiment with crossing genres, come up with a completely original set and go places.

“Should I have heard of you?” he asked.

“I doubt it. Not unless you make a habit of hanging out down the White Horse on open-mic night.”

“Kind of. More emo and goth kids these days, but there’s a few bikers still hanging around. Freddie’s mates.”

“Freddie Henderson? Is he still the landlord?”

“Yeah, you know him?” Cosmo couldn’t imagine the two of them moving in the same social circles. For a start, Freddie had a shaved head, handlebar moustache, and the rest of his body was pretty much covered in tattoos and black leather. Alasdair Grant, on the other hand, was corporate establishment through and through.

Boss-man got this weird expression on his face. Fond? Yeah, it was that, but there was something more. Something kind of hot, like he was remembering sexy good times.

English through and through, Josephine Myles is addicted to tea and busy cultivating a reputation for eccentricity. She writes gay erotica and romance, but finds the erotica keeps cuddling up to the romance, and the romance keeps corrupting the erotica. Jo blames her rebellious muse but he never listens to her anyway, no matter how much she threatens him with a big stick. She's beginning to suspect he enjoys it.

Jo's novel Stuff won the 2014 Rainbow Award for Best Bisexual Romance, and her novella Merry Gentlemen won the 2014 Rainbow Award for Best Gay Romantic Comedy. She loves to be busy, and is currently having fun trying to work out how she is going to fit in her love of writing, dressmaking and attending cabaret shows in fabulous clothing around the demands of a preteen with special needs and an incessantly curious toddler.

Posted by Making it Happen at 9:30 AM