It is the first book in a new series.

Antiques and ammunition do not mix well.

Detective Gage Roskam is hunting stolen jewels taken from a Tokyo exhibition then shipped to Seattle. Mired in a deadly race involving the Yakuza, an enigmatic Englishman and too many indecipherable clues, he doesn’t have time to indulge in Dominant fantasies.

When their worlds collide, neither Landry nor Gage expects things to get quite as complicated—or dangerous—as they do. When Landry steps into the path of some powerful, ruthless people, it’s up to Gage to protect him. Along the way they might just discover what they both need. 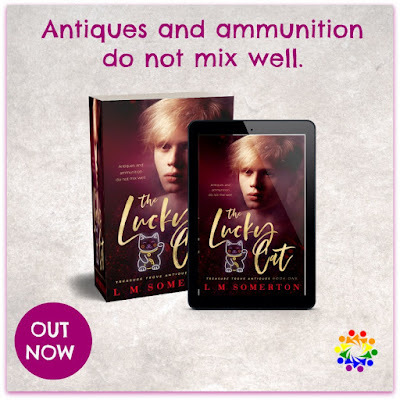 
Sometimes there were advantages to being vertically challenged. Landry, his ass sticking out from under a seventeenth-century folding card table, paused to contemplate other occasions when his five-feet-six-inch stature had been of benefit. Not when attempting to get served at his favorite leather bar, though getting squished between all those black-clad hunks was always bearable. He snorted. Not when reaching for his preferred brand of chips at the market, which were always on the top shelf. Put there, he was sure, by the snotty assistant manager as revenge for Landry turning down his offer of a quick blow job in the staff restroom. As if. Never at family meals when he got to sit between his older twin brothers like a blond munchkin between two extras from Vikings. He reversed, wiggling his back end to avoid a willow-patterned platter balancing on a brass coal scuttle. His knees ached and he’d banged his elbow on a cast-iron fireguard, but he had rescued the battered cannonball making an escape attempt beneath teetering piles of stock.

“Hey!” Landry went for indignant rather than flattered. He tried to get up too soon and banged his head on solid, woodworm-free oak. “F*ck me!” He finally made it to open air and scrambled to his feet, rubbing his already messy hair into further disarray.

“Is that a request?”

Landry looked up…and up…into a pair of twinkling pale-blue eyes. The customer, because that was who Landry guessed the newcomer must be, was drop-dead, my-ass-is-yours gorgeous and he was grinning. Well, smirking.

“Funny man. What can I help you with, sir?” Landry gritted his teeth and remembered that Mr. Lao, his boss, would swat him like a bug if he snarked at a potential patron. Though, on this occasion, it might be worth it to mess with the man.

Landry rolled his eyes. Black hair, blue eyes and a stubbled, chiseled chin did not equate to a free pass. “The massage parlor is three doors down, just before St. Peter’s. You can get a full-body whatever then confess all in the space of an hour.” He made an ineffective attempt to brush dust from the knees of his ripped black jeans. Blue Eyes reached into his jacket and produced a wallet, which he opened to display a Seattle PD badge and ID card.

“Gage Roskam. Is your boss around?”

Landry was more turned on than intimidated by the badge. Cop plus handcuffs equaled sexy time. Every cop he’d ever met had had a ‘don’t f*ck with me’ attitude and a natural bent for control—just the type of man Landry liked to mess with. He batted his lashes. “And what makes you think I’m not the boss?”

“You’re not a sixty-eight-year-old Chinese guy by the name of Jian Lao?”

“Very observant, Officer. All that training paid off.” Landry put an extra bit of swing into his hips as he walked toward the cash desk at the rear of the shop.

“Hey! Aren’t you supposed to call me sir, what with you being a public servant and all?”

“In your dreams, and you should show more respect for law enforcement.”

“You’re lucky I’m on duty or I’d bend you over the nearest flat surface and give you the spanking you’re begging for.”

Take one bratty, snarky shop assistant and add one just as snarky copy who just happens to also be a Dom, then toss in an international mystery that just so happens to bring them together…there’s your setup for The Lucky Cat.  Landry is one very lucky guy to have Gage brought to his doorstep.

Now when I say snarky, I mean cover-to-cover and not just from the main characters Landry and Gage.  Sarcasm, snark, and smart-ass comebacks can be found coming from the supporting characters as well.  At times it teetered on the edge of going overboard, but I’m letting that go just because of the number of times the author made me giggle-snort.  And admittedly it did makes Landry’s brat aspect funny, and I was always waiting to see just how far he would push Gage.

if the witty banter doesn’t pull you in, the intrigue of the case in which Landry finds himself embroiled will certainly do the trick.  Plus there’s the uncertainty surrounding James Ellery’s character to keep you on your toes as well.  If that’s not enough, the intimate scenes between Landry and Gage should keep you fanning yourself for a while.

The storyline is solid and everything progresses at an even rate.  Landry and Gage are attracted to each other from the start, and while this is not really insta-love, it could be viewed as lust at first sight that eventually morphs into a more solid, lasting relationship.

The Lucky Cat was a very solid 4-star read for me, pushing towards 4.5.  I really enjoyed reading this, and would definitely recommend it.  If you like bratty subs and Doms that keep them in line, this story will be right up your alley.  Adult language and sexual content make this story one for readers 18+.

Lucinda lives in a small village in the English countryside, surrounded by rolling hills, cows and sheep. She started writing to fill time between jobs and is now firmly and unashamedly addicted.