It is a standalone book.

I hate Sam Shelby. So why do I want to kiss him?

After high school, Sam Shelby moved to New York. Eight years later, he returns to Cleveland and lands a job at the best ad firm in town. It would be the perfect gig, if his boss weren’t such an ass.

After his wife leaves, Donovan Cooper questions everything. The arrival of a young, arrogant, gifted graphic designer at Donovan’s firm is the last straw.

Tempers flare over office gossip, and following a nasty argument and scathing kiss, Donovan flails away from heterosexuality while Sam struggles to keep his “no relationship” rule intact.

Despite ugly socks, fiery fights, and their best intentions to not fall in love, these bullheaded coworkers can’t deny their chemistry. Donovan seeks happiness while Sam seeks success, but is there room for more? 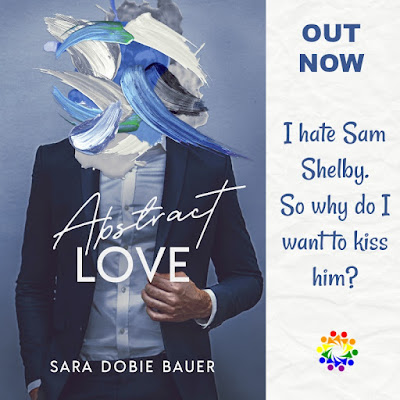 Donovan sifted through a few hand-drawn logos on the desk and froze when he found a crudely drawn sketch of himself. Sam must have done it during a meeting at some point, capturing Donovan’s faux hawk, wide jaw, and severe expression.

Jesus, was this what other people saw when they looked at him? Did he really look so miserable?

“Make yourself at home?”

Donovan dropped the picture and stood straight at the sound of Sam’s voice.

He leaned against the doorframe, with one ankle crossed over the other.

“It’s really bullsh*t when people say that, you know?” Sam said. “Make yourself at home. No one actually wants their friends to take off their pants, drink all their beer, and binge The Great British Bake Off.” He paused. “What are you doing in my office?”

The office door closed as he stepped inside. “Sure you did, or you wouldn’t be in here, so what’s up?”

Sam circled the desk, so Donovan circled the other way, although he noticed it was true what coworkers said: Sam did smell good—like clean laundry and cedar. “I think we started off on the wrong foot.”

Sam snort laughed and flipped through some files on his desk. “More like wrong continent, man.” When he found what he was looking for, he tapped the file’s corner against his palm. “I can handle guys like you, you know.”

Donovan shifted back on his heels. “Guys like me?”

“Hmm. Corporate assholes. All you see are dollar signs. You take no pleasure in your work. Advertising is money to you, not art, but without the artists, there wouldn’t be advertising, so…” He sucked his cheeks into his mouth, a momentary fish face.

He used to love art.

Sam continued, “I know I look like a six-foot-two Disney princess, but you’re not gonna rattle me.” To prove his point, Sam got right up in Donovan’s personal space until Donovan took a step back. Again, he was not used to dealing with someone his own height. “And I’m right about the Great Lakes ad campaign. If you’d pull your head out of your ass, maybe you’d notice.” He turned away abruptly.

He rested a hand on the desk and cocked his hip out—the very picture of young attitude. “Listen to me in meetings.”

“Nope.” He shook his head and ran a hand through his unkempt, unprofessional hair. “No, you were hearing. I need you to listen. There’s a difference. And I know I’m just some f*cking kid to you, but I ruled the New York City advertising scene. I know what I’m doing, Donovan, so let me do it.”

“Fine.” He’d had enough. He’d apologized, okay, so he’d done his Monica-enforced duty. He didn’t owe Sam anything else.

He didn’t run for the door, but he definitely moved with speed.

This book started off as a novella in the Come, Play erotica anthology; in its iteration there, I thought it was not so much erotica as it was the beginning of a love story, and I enjoyed that version tremendously.  Now here we get the full, expanded version and get to delve deeper into Sam and Donovan’s lives to see how they got to where they are now, and how the full range of their relationship unfolds.

Don’t call it a relationship in front of Sam, though.  He doesn’t do those—he just wants to have fun with whoever he wants whenever he feels like it without it becoming serious or exclusive.  Donovan knows this going in…but we all know that the heart doesn’t care about things like that.  For Donovan, it’s more complicated by the fact that he’s straight.  Or at least he was until Sam entered his life.

The two of them match well together while at the same time clashing spectacularly.  The serious aspect of their “relationship” develops slowly, which can be mostly attributed to Sam and his insistence on keeping his distance from anything resembling an actual relationship.  The pressure they are both under at work with the project they are working on helps to put the brakes on as well.  Sam also has personal issues that up the intensity in his life as it relates to his family, so there is no lack of drama here.

Abstract Love overall was a 4-star read for me, and I’d recommend it to any M/M contemporary romance fan.  The adult language and sexual content do make this story one for readers 18+, and you’ll also find some casual drug use (marijuana).

Sara Dobie Bauer is a bestselling author, model, and mental health / LGBTQ advocate with a creative writing degree from Ohio University. She lives with her hottie husband and two precious pups in Northeast Ohio, although she’d really like to live in a Tim Burton film.

Follow the tour and check out the other blog posts, interviews, and reviews here