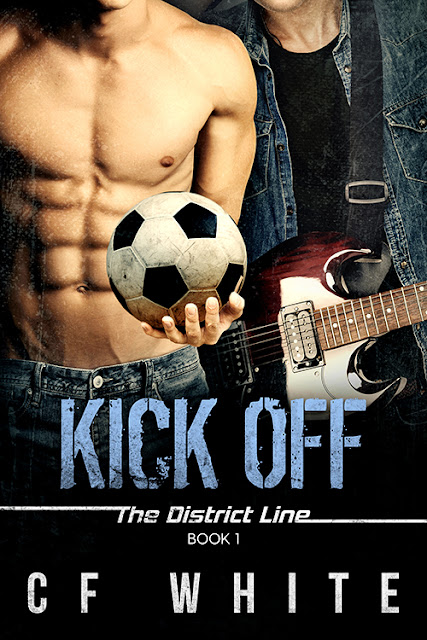 What happens when opposite sides of the track collide?
East Londoner Jay Ruttman has only ever wanted one thing― to be a professional footballer. But after a disastrous brawl on the pitch gets him released from his pro-Academy, he has to follow plan B and enrolls as university Sports Scholar. Head down, train hard and get scouted is his motto. Until he crashes into the man who might just shoot his dreams out of the park.
Kensington elite Sebastian (Seb) Saunders has only ever wanted one thing―to be a rock star. But his father has other plans for him, including taking the helm of his multimillion-pound new business venture across the pond. Live it up, chase the dream and rock out for as long as he can is his mantra. Until he crashes into the man who might just rock his world off its scale.
Jay and Seb live at opposite ends of London’s District Line, separated by wealth, status, family traditions and their own life-long dreams. This startling and gritty contemporary romance series sees them both having to overcome barriers, face fears and beat rejection to fight for the love they need to achieve it all.

NOTE: This is a revised edition of the previously self-published The District Line. This version has gone through major edits, including character name changes, added content and new chapters, yet the overall story remains the same. It is advisable for anyone who has read the original to read this new version before continuing with the series.

Jay rolled over onto his side, bed sheets crumpling around him. It took him a moment to realise his mobile had been vibrating on his bedside table. He untangled an arm from the sheets and hit the light on his digital alarm clock. 1:07a.m. Rubbing the sleep from his eyes, he checked the display. He instantly hit Answer. “All right?”

“Hey.” Seb’s soft voice crackled through the speaker. “Did I wake you?”

“It’s one in the morning, Seb. Course you woke me. Are you all right?”

“You wanna talk about it?” Jay rubbed his free hand over his eyes and sat against the cool wall.

The low rumble of a car engine rushing past Jay’s bedroom window reverberated through the receiver of his phone.

Jay dragged back the covers and bounded over to his window. He spotted Seb, phone in hand, on the other side of the road, perched on the wall of the concrete playground. He glanced up to Jay and smiled, awkwardly.

“Wait a sec.” Jay shuffled away from the window and hung up, throwing the mobile down onto his bedside table. Desperately searching his bedroom for something to wear, he found a pair of loose grey jogging bottoms and yanked them over the boxers he’d worn to bed. Keeping on the thin T-shirt he’d been sleeping in, he tucked his bare feet into the nearest trainers he could find and clicked open the door to his room. He crept downstairs and out of the front door into the street.

“You okay?” Jay shivered at the biting cold.

Seb’s eyes were bloodshot and cigarette butts dusted the pavement by his feet.

“Sh*t night.” He shrugged, barely looking Jay in the eye. “Guess I can’t sleep without a goodnight kiss anymore.”

Jay melted at the gentle words. He stepped forward, ran a hand through the crunchy tassels of Seb’s hair and planted a delicate kiss to his lips. Returning the kiss, Seb deepened it and his eyes filled with unexpected tears. On breaking apart, Seb buried his face in Jay’s neck, leaving a trail of moisture on Jay’s skin.

Startled at the vulnerable display, Jay curled his arms around Seb and squeezed, rubbing one hand in smooth circles along the nape of Seb’s neck. “Talk to me,” he whispered. “What happened?”

Seb pulled away. “Can we not talk? And you just kiss me like that again?”

Jay tilted his head to the side and moved in to do just that. Tears fell from Seb’s eyes, sliding onto Jay’s cheek as their lips moved fluidly together. Jay stroked Seb’s arm, trailing his hand down to take hold of Seb’s. He broke the kiss and tugged Seb with him to cross the road.

“What about your parents?” Seb asked, not quite moving but not resisting either.

“They’re sparko. And they both go to work early doors.” He stopped at his front door. “I ain’t letting you leave. I can smell the alcohol and taste the smoke. You ain’t gotta tell me what happened, but you are gonna let me hold you.”

Seb nodded, and Jay dragged him into the house, up the stairs, and into his bedroom. Closing the door, Jay stretched out his arms, indicating Seb should come to him. He did, and Jay slipped his hands under the shoulders of Seb’s jacket, shrugging him out of it. Jay tossed the jacket aside, then curled his fingers under the bottom of Seb’s T-shirt and Seb raised his arms so Jay could drag it over his head and throw it to join his jacket.

Their eye contact never wavered. Jay rested his hands on Seb’s hips, guiding him backward to sit on the end of the bed, then knelt, pulling off Seb’s trainers and socks. Seb fell to lie on the soft mattress and unclasped his belt buckle, popping open his button fly, and Jay curled his fingers into Seb’s waistband to lower the jeans off his legs.

The whole procedure was performed without a hint of seduction and filled with a tenderness new to Jay. He stepped out of his trainers and jogging bottoms, climbed onto the bed and pulled Seb closer. Stroking his fingers through Seb’s hair, Jay pressed his lips and nose to Seb’s dried-tear-stained cheek, tasting the salty residue on Seb’s skin. He kept his lips there, breathing softly to the sound of Seb’s beating heart.

Kick Off is the first in The District Line series, and just so you know up front—everything is not tied up and resolved in this book.  Keep this in mind when you’re reading so you’re not too out of sorts at the end.  Once you finish though, expect to be hooked for the next two books (I know I am).

It did take me a little while—maybe the first third of the book—to finally settle in and feel comfortable with the characters and story.  Part of that for me was Jay and Seb’s characters, and part of that was me getting used to being immersed in the location, mostly with the heavier slang of the East London characters…which I did love, it just took me a bit to get used to it.

Jay is somewhat of a typical closeted jock, he’s a football player (soccer for those of us from the U.S.) and is only out to his best friend.  He’s dedicated and is keeping himself on track to make it back to the point where he has a shot again at a professional career playing ball after a personal issue knocks him back a bit.  Seb is a trust fund guy, but there’s strings attached that could end up metaphorically strangling him.  He rebels against his father with his music, tattoos, and general lifestyle, and is quite outspoken about it around good old dad as well.  He’s been a bit of a player for a while now; Jay is quite the opposite…until they both literally crash into each other.

Seb’s “whatever”, comes-from-money, out-and-proud attitude coupled with Jay’s closeted, poor side of the tracks, introverted-off-the-field one are absolutely a situation of opposites attract.  The wide gap of their differences and the time it takes to move past them are what I was referring to about it taking a little bit for me to get comfortable with their characters.  Once they do though, they both start falling fast and hard—something neither expected, and it complicates things when Seb’s future obligations with his father come due sooner than he thought they would.

Seb and Jay go from unexpected acquaintances to experimenting to a lot more than a hookup, to eventual boyfriends…which makes the events at the end of the story all the more complex and emotional (you might need some tissues).  And yes, you’ll be left with uncertainty…and the wait for book two.  Oh, and also a burning need to slap silly Seb’s ex.

Kick Off was a solid 4-star read for me, and by the end I was fully hooked for the rest of the series…I really do want to see Seb and Jay get their happily ever after.  I did expect the end to come about the way it did since I was aware that their story goes over the whole series, and while it was frustrating (as most series told in this way can be), I’m definitely sticking around to see where it goes.  This book is meant for readers 18+ for adult language and sexual content.

Brought up in a relatively small town in Hertfordshire, C F White managed to do what most other residents try to do and fail—leave.

Studying at a West London university, she realised there was a whole city out there waiting to be discovered, so, much like Dick Whittington before her, she never made it back home and still endlessly search for the streets paved with gold, slowly coming to the realisation they’re mostly paved with chewing gum. And the odd bit of graffiti. And those little circles of yellow spray paint where the council point out the pot holes to someone who is supposedly meant to fix them instead of staring at them vacantly whilst holding a polystyrene cup of watered-down coffee.

Eventually moving West to East along that vast District Line, C F White settled for pie and mash, cockles and winkles and a bit of Knees Up Mother Brown to live in the East End of London; securing a job and creating a life, a home and a family.

After her second son was born with a rare disability, her life changed and brought pen and paper after she’d written stories as a child but never had the confidence to show them to the world. Now, having embarked on this writing journey, C F White can’t stop. So strap in, it’s going to be a bumpy ride.

Other books by C F White