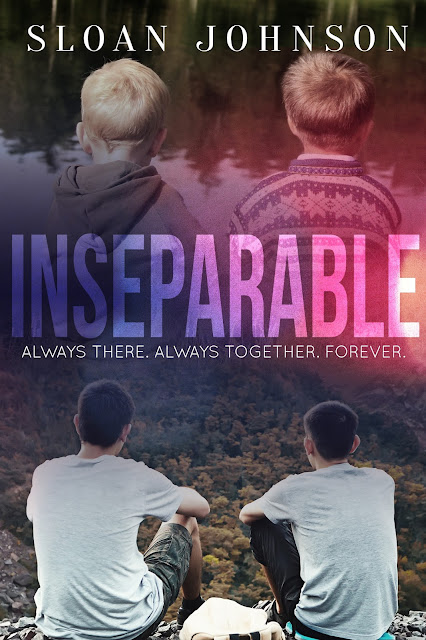 Trevor and Gabe never knew life without the other. As only children, they grew up as close as brothers, but their love grew to something more. Something they couldn't talk about because their parents wouldn't understand.


Gabe is gay and unapologetic about his sexuality. He refuses to live his life in the shadows, but that doesn't mean he isn't harboring secrets.

Trevor is his parentsí miracle child and he doesnít want to hurt them. Coming out, admitting he's in love with Gabe, could ruin everything.

Heading off to college was supposed to finally free them to be together, but nothing is as easy as it seems. Can they find a way to navigate this new world, living and loving openly?

Best friends to lovers has always been one of my favorite tropes; here in Inseparable the author takes this in a new adult setting and gives it a little extra complication thanks to the dynamic between Gabe and Trevor’s families.  In addition, Gabe’s out status while Trevor is still in the closet means some extra angst on top of the tension already present each time the two head home to visit.

After so long not being able to spend intimate time together without having to play lookout, both Gabe and Trevor are happy to finally be getting away to college where they can be with each other without looking over their shoulders.  Since nothing ever goes as planned, there’s bumps along the way which in turn cause stress levels to rise, and both men worry over the other spreading his wings with things that don’t include them both.  The angst levels get pretty high as they both worry about losing each other.

One thing that’s very obvious between them is how much they love each other, and as a reader it was easy to see that neither would give up without doing everything they could to make sure they’d stay together—even if neither of them was sure themselves.  The angst and tension continues to rise throughout the story, spurred on by the normal growth of both Gabe and Trevor as they adapt to college life as well as the even more troublesome issue of how their families will react to the two of them being together.  It all builds up as they both come under more and more pressure until things hit a breaking point.

For the supporting characters, my curiosity is piqued for Seth, one of Gabe and Trevor’s roommates, and I’ll be waiting to see if we get to hear his story at some point.  I really liked Trevor’s dad and how supportive he was, as well as Gabe’s parents. I did find both of their mothers to be a bit overbearing, though Trevor’s mom was well over the top (and don’t even get me started on her reaction when she finds out about them).

Inseparable is a good new adult/college romance, and was between a 3.5 and 4-star read for me.  I’d have said a solid 4 stars if it wasn’t for the constant tension and angst which for me was just a tad grating after a while.  While the full-on sex scenes took place primarily off-page, there’s enough intimate action along with adult language to make this a book for readers 18+.  This is the first book in the author’s Port Java series, and I’m intrigued to get the stories of the supporting characters—especially Seth.

Sloan Johnson is a big city girl trapped in a country girlís life. While she longs for the hustle and bustle of New York City or Las Vegas, she hasn't yet figured out how to sit on the deck with her morning coffee, watching the deer and wild turkeys in the fields while surrounded by concrete and glass.

When she was three, her parents received their first call from the principal asking them to pick her up from school. Apparently, if you aren't enrolled, you can't attend classes, even in Kindergarten. The next week, she was in preschool and started plotting her first story soon after.

Later in life, her parents needed to do something to help their socially awkward, uncoordinated child come out of her shell and figured there was no better place than a bar on Wednesday nights. It's a good thing they did because this is where she found her love of reading and writing. Who needs socialization when you can sit alone in your bedroom with a good book?

Now, Sloan is a tattooed mom with a mohawk and two kids. She's been kicked out of the PTA in two school districts and is no longer asked to help with fundraisers because she's been known to lose herself with a good book and forget she has somewhere to be.