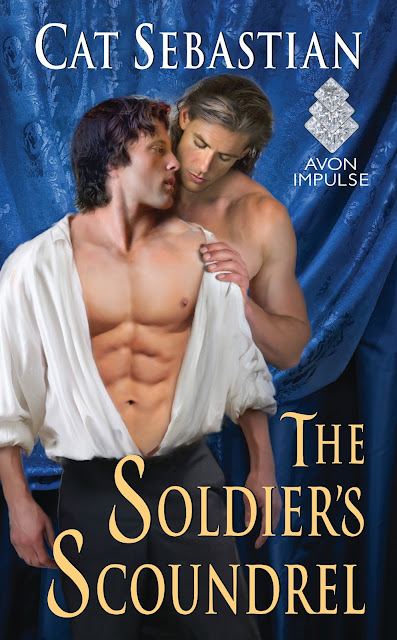 A scoundrel who lives in the shadows

Jack Turner grew up in the darkness of London’s slums, born into a life of crime and willing to do anything to keep his belly full and his siblings safe. Now he uses the tricks and schemes of the underworld to help those who need the kind of assistance only a scoundrel can provide. His distrust of the nobility runs deep and his services do not extend to the gorgeous high-born soldier who personifies everything Jack will never be.

A soldier untarnished by vice

After the chaos of war, Oliver Rivington craves the safe predictability of a gentleman’s life-one that doesn’t include sparring with a ne’er-do-well who flouts the law at every turn. But Jack tempts Oliver like no other man has before. Soon his yearning for the unapologetic criminal is only matched by Jack’s pleasure in watching his genteel polish crumble every time they’re together.

Two men only meant for each other

Jack absently skimmed his finger along the surface of his desk, tracing a swirl through the sand he had used to blot his notes. Another case was solved and done with, another gentleman too drunk on his own power and consequence to remember to pay servants and tradesmen, too dissipated to bother being faithful to his wife. Nearly every client’s problems were variations on that same theme. Jack might have been bored if he weren’t so angry.
A knock sounded at the door, a welcome distraction. His sister always knocked, as if she didn’t want to interrupt whatever depravities Jack was conducting on the other side of the door. She did it out of an excess of consideration, but Jack still felt like she was waiting for him to do something unspeakable at any moment.
She was right, of course, but still it grated.
“Come in, Sarah.
“There’s a gentleman here to see you,” she said, packing a world of both disapproval and deference into those few words.
Really, it was a pity she hadn’t been born a man because the world had lost a first rate butler there. The butlers Jack had served under would have been put fairly to shame.
“Tell him to bugger off.” Sarah knew perfectly well he didn’t take gentlemen as clients. He tried to keep any trace of impatience out of his voice, but didn’t think he quite managed it.
“I have customers downstairs and I don’t want a scene.” She had pins jammed into the sleeve of her gown, a sign that she had been interrupted in the middle of a fitting. No wonder her lips were pursed.
“And I don’t want any gentlemen.” Too late, he realized he had set her up for a smart-mouthed response. Now she was going to press her advantage because that’s what older sisters did. But Sarah must have been developing some restraint, or maybe she was only in a hurry, because all she did was raise a single eyebrow as if to say, like hell you don’t.
“I’m not your gatekeeper,” she said a moment later, her tone deceptively mild. But on her last word Jack could hear a trace of that old accent they had both worked so hard to shed. Sarah had to be driven to distraction if she was letting her accent slip.
“Send him up, then,” he conceded. This arrangement of theirs depended on a certain amount of compromise on both sides.
She vanished, her shoes scarcely making any sound on the stairs. A moment later he heard the heavier tread of a man not at all concerned about disturbing the clients below.
This man didn’t bother knocking. He simply sailed through the door Sarah had left ajar as if he had every right in the world to enter whatever place he pleased, at whatever time he wanted.
To hell with that. Jack took his time stacking his cards, pausing a moment to examine one with feigned and hopefully infuriating interest. The gentleman coughed impatiently; Jack mentally awarded himself the first point.
“Yes?” Jack looked up for the first time, as if only now noticing the stranger’s presence. He could see why Sarah had pegged him straight away as a gentleman. Everything about him, from his mahogany walking stick to his snowy white linen, proclaimed his status.
“You’re Jack Turner?”
There was something about his voice—the absurd level of polish, perhaps—that made Jack look more carefully at his visitor’s face.
Could it—it couldn’t be. But it was.

With this being the author's debut novel, I can say that she is one to keep an eye on as The Soldier's Scoundrel was a very solid and attention-getting story.  It has two very likable main characters in Jack and Oliver, a good cast of supporting characters, and a strong storyline with a bit of intrigue to keep you interested from start to finish.

I liked the matchup of Jack and Oliver with the bit of class difference as well as personality differences.  Things between them develop slowly, with their relationship made more difficult due to the time in history in which the story takes place.  That's one thing I always enjoy with historical M/M romance as it adds an element of difficulty to the relationship.  The two of them complement each other quite well and make a great match.

The writing was smooth and steady, and the story kept my interest all the way through.  I liked the historical accuracy, and things were detailed well to give me a very good picture in my head of everything that was going on.  The intimate scenes were well done with the right amount of heat, and were quite sensual and provocative.

This story was a rock-solid 4-star read for me, and I'm really looking forward to reading the next book.  It's a great opposites attract tale, and I would highly recommend this to M/M historical romance fans--it really is a very good example of this genre done right!

Author Info
Cat Sebastian lives in a swampy part of the South with her husband, three kids, and two dogs. Before her kids were born, she practiced law and taught high school and college writing. When she isn't reading or writing, she's doing crossword puzzles, bird watching, and wondering where she put her coffee cup.

Posted by Making it Happen at 8:30 AM