An apple a day won’t keep this doctor away.

Linden Grove has always known that he’s not destined to be the next pack alpha. That position belonged to his brother Aspen—but then Aspen left the pack to join the military. When the unthinkable happens and the pack is left rudderless, someone has to step up and take care of it. Can a doctor go from “do no harm” to defending his own with his teeth and claws?

Colt Doherty is used to a certain kind of life. Glittering, picturesque, and . . . empty. As the youngest child of the country’s only werewolf senator, Colt has grown up in the spotlight, and he’s all too used to knot-headed alphas taking credit for the work of others, especially omegas like himself. When his editor sends him to write a story on the Grove pack, though, he finds something completely unexpected: Linden Grove in his unpolished perfection, as shiny and unexpectedly sweet as the apples his pack are known for.

A Grove pack omega has been kidnapped, and someone has to step up. The pack needs Linden to fill his father’s shoes, but no wolf can stand on his own. To save the day, sheltered Colt has to drop the politics and become the action hero he never thought an omega could be.

Black Moon is an 90k word standalone novel featuring one fiery journalist, one doctor with an obsession for hand knit sweaters, and the sweetest apple pies on the whole eastern seaboard, all bundled up in a non-mpreg A/B/O universe. 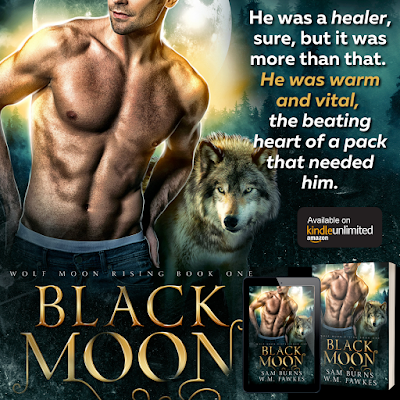 “You like that it even works on humans?” I asked through my teeth as Chase led me away, a firm hand between my shoulder blades.

“I don’t know what you’re talking about, Colt.” He smiled at the people we passed, leading me toward a table where a server was ladling out crystal glasses of punch.

I groaned, downing the rest of my champagne and setting the flute aside on the tray of another server. If I was going to turn our direction, I needed the leverage of two free hands. “There’s an open bar. Let’s go to where the wine is.”

With a roll of my eyes—of my entire head—I looked up at him. “There is no such thing as enough at a gala. Anyway, I meant you like imposing your big bad alpha will on unsuspecting humans, don’t you?”

Maybe it didn’t. Maybe there was nothing innate about alphas that got them their way outside of a traditional pack setting. Of course, if you went around the world expecting to get everything you wanted, it often worked out that way. It’d been a process of almost three decades, but I was finally getting the hang of it.

And in that spirit, I jerked my head at another nearby waiter, catching his attention just in time to snatch another flute of champagne off his tray. Chase sent me a narrow-eyed glare.

“Don’t worry, big bro,” I said, raising the flute to him before lifting it to my lips. “I’ll take the town car home.”

We all would. There was a requisite Doherty-family post-mortem after any society event.

“I need you to keep your head on straight,” Chase warned once we got far enough away from the main crowd and the bright chandeliers overhead that he thought we were safe to talk. “Dad needs Walsh’s endorsement if he’s going to keep his Senate seat. You can’t go f*cking it up.”

That deserved another eye roll if anything ever had. “Walsh is not interested in pissing Dad off. He’s interested in getting laid.”

It was a thing with some humans since werewolves had come out of hiding decades ago. You heard about a big, hot, muscly alpha who’d dominate you in the bedroom, and that sounded like an adventure worth trying.

I’m already a huge fan of this writing duo, and I love paranormal creatures and the Alpha/Beta/Omega dynamic, so of course I was going to pick this one up!  The story has a good setup and the majority of the world building is evident.  The two main characters, Linden and Colt, are both likable and solid leads.  The story itself for the most part is solid, and it does have a good supporting cast that easily lends itself to future stories in the series.

Linden and Colt are a good matchup, and strongly complement each other.  They absolutely have that all-important physical chemistry (my oh my, their encounter during Colt’s heat…whew!), and the mate attraction is more subtle as it develops than demandingly overwhelming, which worked well for them.

There’s some drama in the first part of the book with a kidnapped omega from the pack (Brook, my heart broke for him!), and once that is handled and Colt’s heat has passed the story did seem to lag a bit as things began to focus more on pack politics and who was going to become the next pack Alpha.  I was glad once a bit more drama cropped up to pull my attention more solidly into the story again in the last part of the book.

I did enjoy the story, and overall it was a 4-star read for me.  Since I mentioned Colt’s heat earlier and the steaminess of that portion of the story, I’m sure you’re not surprised to know I recommend this for readers 18+ for the adult language and sexual content.  I’m definitely looking forward to more in the series, and really want Brook to get his happy ending after everything he’s been through.

To celebrate Sam & Waverly's new release, we are giving you 1 of 3 chances to win an e-copy of Black Moon!

Sam is an author of LGBTQIA+ fiction, mostly light-hearted fantasy romances. Most of her books include a little violence, a fair amount of swearing, and maybe a sex scene or two. Or four.