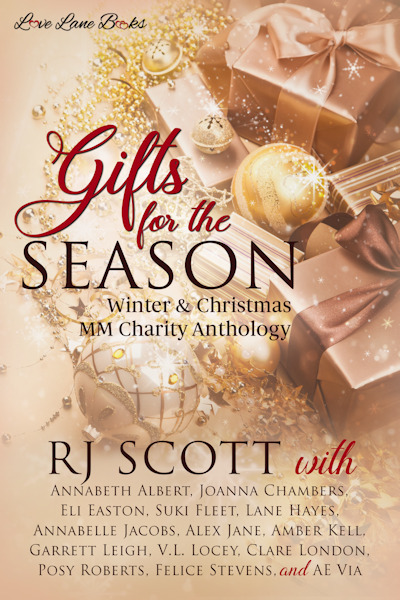 All proceeds donated to The Trevor Project - you can find out about the wonderful things they do here.

RJ Scott - Single Dad Christmas - It would be a Christmas miracle if he loved me back.⁣⁣⁣
⁣⁣⁣
Annabeth Albert - Must Be Santa - Tis the season for Operation Christmas Papa!⁣⁣⁣
⁣⁣⁣
Joanna Chambers - The First Snow of Winter - Christmas Eve, 1814: a maimed war hero and the childhood friend he almost kissed five years earlier are trapped together by the first snow of winter⁣⁣⁣
⁣⁣⁣
Eli Easton - Twelve Days of UPS - What happens when your Secret Santa is less intriguing than the delivery man who brings the gifts?⁣⁣⁣
⁣⁣⁣
Suki Fleet - Sometimes, Always - When Echo’s Christmas Eve surprise for Peri goes a little sideways, it turns into a night they’ll both remember for the best reasons, for always.⁣⁣⁣
⁣⁣⁣
Lane Hayes - Out For The Holidays - Good Things Happen When You’re Out for the Holidays!⁣⁣⁣
⁣⁣⁣
Annabelle Jacobs - Driving Home For Christmas - A road trip, snowstorm, and only one big bed at the Inn…⁣⁣⁣
⁣⁣⁣
Alex Jane - Homestead for the Holidays - Alone in a cabin in snowy Nebraska for Christmas⁣⁣⁣
⁣⁣⁣
Amber Kell - A Santa for Trin - Everyone needs a bit of Christmas magic.⁣⁣⁣
⁣⁣⁣
Garrett Leigh - No Place Like Home - As long as they’re together, love always wins⁣⁣⁣
⁣⁣⁣
V.L. Locey - Dressed In Holiday Style - Can the spirit of Christmas save this budding love affair?⁣⁣⁣
⁣⁣⁣
Clare London - Five Gold Blings - Where Christmas sparkle leads two lonely hearts⁣⁣⁣
⁣⁣⁣
Posy Roberts - Sojourn For Christmas - This year, a place to stay is the best Christmas gift Sawyer could ask for.⁣⁣⁣
⁣⁣⁣
Felice Stevens - The Gift of Forever - What do you get the man who has everything?⁣⁣⁣
⁣⁣⁣
AE Via - An Unworthy Gift - What do the lonely do at Christmas?⁣⁣⁣

This anthology is a great mix of stories from so many of my favorite authors.  Some are peeks into characters from their previous books, others are totally new characters, but all will make you smile, swoon, and sigh.  Here’s my quick takes on each of the stories.

AE Via - An Unworthy Gift

This story struck just the right balance between angst and sultry while also delivering sweet at the same time.  Oh, how much I loved Spencer and Cole!  Though at first Cole seems like he’s trying too hard, later—after the sultry part—it flips to that bit of sweet, and eventually to full-on need.  4.5 stars.

Lane Hayes - Out For The Holidays

It was nice to see what basically amounted to a slice of Derek and Gabe’s life here, though that’s really all it was.  There was a small injection of angst between Derek and his mother, but beyond that it’s just a quick visit with the guys.  3 stars.

Oh, oh, oh…angst and angst and angst (and a dash of cuteness from the kids)…and then SQUEEEE!  This story was everything and while I wanted to bonk Austin on the head for keeping his mouth shut, I loved Paul’s wish to Santa.  5 stars.

Awww...I loved the setup for this story with the gift packages.  It was a great way to slowly develop things between Paul and Dan, and made for such a sweet read.  4.5 stars.

Annabeth Albert - Must Be Santa

I’m one of those people who don’t really care for kids in the romances I read, but I was still happy to revisit Teddy and Nick and see how their relationship had progressed.  This was a sweet look at their chance at growing their family, with a dash of spice on the side.  4 stars.

I’m the first one to admit that I’m always wary of historical M/M stories primarily due to how those in the LGBTQ+ community were treated in earlier eras.  This story avoided those types of drama, concentrating on Sam dealing with the loss of his arm and the chemistry still present between Sam and Jasper when they see each other again.  Truly enjoyable, and personally I’d love to see this expanded into a full-length novel.  5 stars.

A cute look at a fledgling fashion influencer and the delivery guy who believes in him, encourages him, and falls for him.  3.75 stars.

Posy Roberts - Sojourn with You

All right now…no fair teasing like that.  Now you’ve got me on the hook wanting a LOT more from Sawyer and Gregg!  4 stars.

Peri and Echo are from the author’s story Sometimes There’s Stars, and even without having read that book it’s immediately apparent that the intensity between these two is sky-high.  While it did feel like I’d stepped into a story already in progress, I still became wrapped up in the powerful feelings so evident between them.  4 stars.

This story centers on an existing couple from a prior book so I kind of felt thrown into the middle of things not knowing their history.  It was mostly a glimpse into their life now, and how dedicated they still are to each other.  3.5 stars.