It is a standalone book.

Everyone has a second face.

Blurb
Personal assistant Sam Coleman can do it all: housekeeping, groundskeeping, bookkeeping. The catch? It’s a con.

Ed Simon, his newest millionaire boss, doesn’t know Sam Goldman is a Robin Hood for hire who targets rich jerks. Sure, Sam keeps the money for himself, his crew, and his real employers, but at least they only steal from bad people.

Until sweet, fumbling Ed, who doesn’t seem to have a single vice. Too bad the people who hired Sam won’t let him back out. They want Ed’s money, and they’ll hurt Sam and his friends to get it.

For years Ed has kept people at arm’s length, but Sam’s charms wear down his defenses—just as he learns their budding relationship was an act. Sam isn’t who Ed thought he was, but Ed has a dark secret too: he’s a vampire. And someone is framing him for a series of bloody murders.

When the real villains force their hand, Sam and Ed must choose: work together, trust each other, and give in to the feelings growing between them… or let what might have been bleed out like the victims piling at their feet.

Excerpt
Sam was exhausted, probably because he hadn’t slept well in the past two days, but when he was ready to call it a night and looked around for Ed, he was surprised to find him outside, already in the pool. Sam was usually gone before Ed took his swims.

The tricked-out radio by the patio doors was blasting loud enough to carry outside, playing Blue Oyster Cult and making Sam smile. He didn’t fear the reaper so much himself anymore either.

Ed wasn’t doing any complicated strokes, just floating serenely on his back, arms gently moving to keep him up while he gazed at the stars beginning to glitter above him. He’d left the doors open as if to invite Sam to watch, so it was easy to do so without calling much attention to himself.

Ed didn’t look like a predator while swimming, his trunks clinging to him, chest bare. Sometimes it was hard for Sam to accept that dissonance—this version of Ed compared to the swift, brutal one—but then, wasn’t a lion capable of seeming like a housecat even if it was always dangerous?

“Would you like to join me?” Ed called without turning to look at him. “I have an extra suit upstairs.”

Sam wondered if that made him the lion tamer.

Enjoying the way Ed’s eyes fixed to his mostly bare body when he descended from upstairs in the spare trunks, Sam took his time walking to the edge of the pool, set his clothes on one of the lounge chairs, and stepped off for a simple, smooth drop into the water. He shook the excess from his hair and face when he resurfaced, seeking out Ed at the other end.

“Tell me,” Sam said, lifting up to float lazily on his back, “even without your telescope, how many of those can you name?”

“The stars? Or constellations?” Ed lifted as well, both watching the sky as they orbited each other.

Ed navigated to drift up beside Sam, tracing over invisible lines in the sky. “Gemini. Sort of like two stick figures holdings hands.”

Sam chuckled. “And you?”

“Pisces is there.” Ed dragged his finger the other direction. “See the way the ends connect and then it makes a sort of tilted V?”

“We had to be more creative back then.”

Blinking as what Ed was implying sunk in, Sam righted himself, not sure if he could ask, “You mean…?”

“I’m not that old.” Ed grinned. He didn’t clarify how old he was, however.

“You know, one of these days, I’m going to get you up on that roof to use your telescope properly.”

Ed scrunched his nose. “I wasn’t lying about not caring for heights.”

“I figured. Any particular reason?”

“I don’t know. Maybe because there weren’t as many tall buildings in my time.”

“Which was…?” Sam tried again, but Ed glanced away.

“Is this our first date?”

Sam read Ed’s hesitancy and didn’t want to push. “I don’t think this counts.” He smirked when Ed looked at him with a start. “We need to leave the house for a real date.”

“We’ll have to start thinking about our rain check, then.” Ed smiled back at him.

Drifting closer, Sam slid his hands around Ed’s waist to finally connect and pull him in. Even in the heated pool, Ed’s skin felt bracing. “I guess we will,” he said and started to lean forward.

“Sam.” Ed wrapped his arms around Sam’s neck, but his hands fidgeted, and he held back from letting Sam reach his lips. “You’re not only pretending because you think this is the only way to be safe from me, are you?”

The idea that Ed still expected treachery surprised him, but then, Sam almost had betrayed him again, scared as he’d been. Ed was the most powerful and deadly creature he’d ever met, but he was still vulnerable, still so human.

“According to you,” Sam said, “I’m putting myself in more danger by being with you. You gave me an out, Eddie, and I chose to stay.” 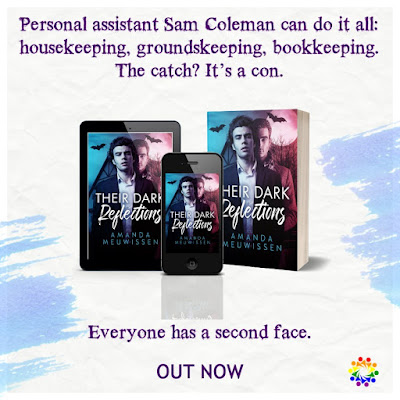 This is the first book I’ve read by this author, but once the descriptor of “sweet, fumbling vampire” caught my eye, I had to immediately add this to my reading list.  And oh yes, Ed is exactly that…but don’t let that fool you.  Seriously—DON’T.

He had Sam fooled for a while.  But once that ended, things started getting pretty interesting.  We know from the start that Sam went to work for Ed as a con, and as more is revealed it turns out there’s more going on than what was first thought.  Even once the identity of the person behind everything is known, there are still surprises to come up almost to the very end.  Just enough to keep you guessing, and even when you think it’s all been revealed?  Nope—here, let’s throw something else at you.

Things between Sam and Ed are very slow burn.  At first because neither of them expects the other to be around long, then because Ed’s true nature makes it difficult for him to keep control.  It’s a learning process for them both, which both ramps the sexual tension up and the frustration levels between them as well.  They definitely have the chemistry between them though, something the slower pace of things helps develop not just physically but between them as friends too.

I liked that most of the classic vampire weaknesses from the majority of the literary myth are not in play here.  It opens up more options for the story and lends the story its own uniqueness.

Overall, Their Dark Reflections was a 4-star read for me, and I would definitely recommend it to fans of M/M paranormal romance.  I also thought the epilogue made for the perfect ending for Sam and Ed, letting readers know how things played out for them without getting too overly sentimental.  This story is meant for readers 18+ for adult language, sexual content, and the bloody scenes you might expect with a vampire being framed for murders ;-)

Amanda Meuwissen is a bisexual author, with a primary focus on M/M romance, and works in marketing for the software company Outsell. She has a Bachelor of Arts in a personally designed Creative Writing major from St. Olaf College, and is an avid consumer of fiction through film, prose, and video games. As author of the paranormal romance trilogy The Incubus Saga and several other titles through various publishers, Amanda regularly attends local comic conventions for fun and to meet with fans, where she will often be seen in costume as one of her favorite fictional characters. She lives in Minnesota with her husband, John, and their cat, Helga, and can be found at www.amandameuwissen.com.

one of three ebooks from the author’s backlist.