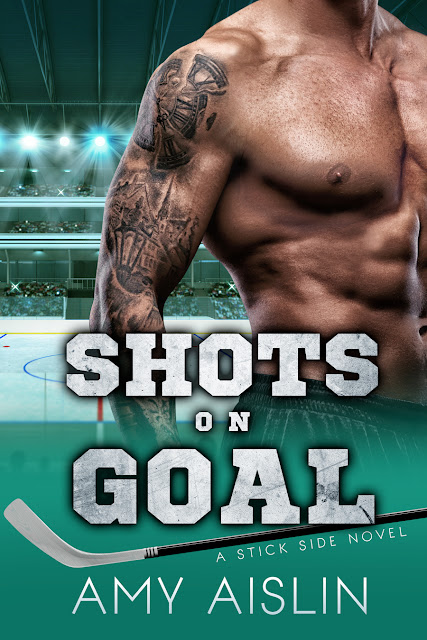 Shots on Goal
by Amy Aislin

Recently traded to the newly formed Vermont Trailblazers, professional hockey player Roman Kinsey needs to focus on helping the team win games and filling the stands, not on the blond, bespectacled part-timer who works at the library he volunteers at. He knows all too well that outing himself equals heartache and ridicule…or worse.

Cody Evans, psych major and grad school hopeful, notices everything and thinks too much. But he doesn’t know what to think when he sees Roman reading to kids. The rugged hockey player just doesn’t look like the type. But it stirs something in him, something he’s never felt before.

When the library is threatened with closure, Cody enlists Roman’s help. As they get to know each other better...much, much better...they realize that they have more in common than books. But Roman’s keeping a big part of himself from his team, and giving in to his feelings for Cody might be more than he’s willing to risk.

"With lots of hockey, delicious food, and the sweetest couple ever, Amy Aislin scores a hat trick with Shots on Goal." — Kelly Jensen, award-winning author of Block and Strike

"Shots on Goal is a great wintertime read. Like a warm blanket and a mug of hot chocolate! Huddle up by the fire and enjoy this cozy story!" — Allison Temple, author of The Seacroft Stories series

“I love hockey romance, and this book delivered all the romance I needed alongside awesome hockey.” — RJ Scott, USA Today bestselling author

“I'm already a big fan of Amy Aslin's Stick Side series, so I was thrilled to get an early read of Shots on Goal. Cody and Roman's story didn't disappoint. Shots on Goal is the perfect blend of the beloved sports and small-town romance tropes. Roman's gruff, strained interactions with his ice hockey team play well against Cody's heartwarming relationship with his fellow library lovers. As these two men inadvertently team up to help save the historic library, Roman realizes there just may be someone worth opening up to, and at the same time, Cody learns that sometimes falling in love brings with it tough choices. Shots on Goal is a strong addition to Aislin's delicious world-building surrounding the sexy, competitive world of hockey. We get to visit old friends from previous books, but it is not necessary to have read them to enjoy Shots on Goal.” — Lucy Lennox, Bestselling author

Shots on Goal is a novel about taking risks, about putting yourself out there, even though history says it could end in disaster. 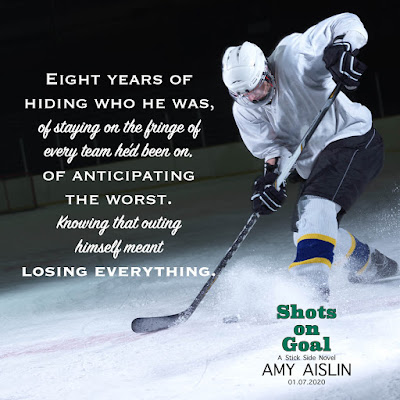 Was he ready for another potential rejection? Not that Cody seemed like the rejection type—after all, Cody was the one who’d invited him tonight—but neither had Kas. Nobody was only what they appeared to be on the surface. Kas had hid a homophobic prick under that happy-go-lucky charm. Cody could be concealing a machete-wielding assassin-for-hire under that good ol’ boy, support-your-local-library exterior.
Opening his text messaging app, he sent a message to Cody: Do you own a machete?
As Roman watched him, Cody, still leaning against the building, jolted. Most likely his phone vibrating in his pocket, an assumption that was confirmed a second later when Cody pulled a phone from somewhere and removed a glove, presumably to answer Roman’s text.
Second assumption confirmed—Roman’s phone buzzed.
A machete? Um, no? Where would I buy one? Is that something you can get at the hardware store?
He didn’t know Cody that well yet, but he had a feeling that was a pretty typical Cody response. His phone buzzed again.
Do you need one? said Cody’s next message. I can ask around and see if someone I know has one you can borrow.
Well, that was . . . awfully sweet.
Yet another text made his phone vibrate.
What do you need it for? Is it to chop someone’s head off like they do in the movies? If so, I can think of less messy ways to commit murder.
What the hell kind of movies was Cody watching?
Surprised into laughter, Roman opened the door, stepped out, and headed across the parking lot. Cody looked up then, and the smile that pulled his lips upward made Roman’s steps falter and his chest tingle.
When was the last time someone had been happy to see him? 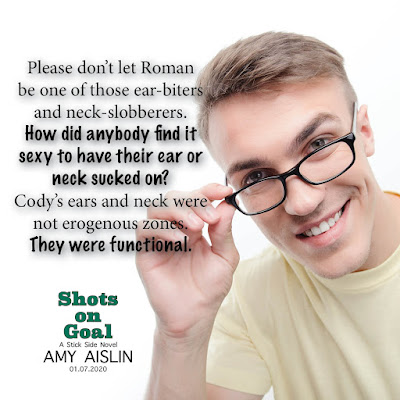 
Can I just tell you right up front how much I loved Cody?  He’s a bit quirky and I love that he works in a library.  He is an excellent match for Roman, perfectly balancing out Roman’s seemingly uptight, loner manner.  Cody plays a big part in Roman’s attitude change, helping to lighten things up.

The fact that Cody is demisexual and Roman’s reluctance to enter into a relationship with a man (there’s that “no coming out in sports” thing for you) both contribute to the relaxed, slow evolution of first their friendship and eventually their committed relationship.  This means you’ll find that things between them are not at all rushed, and move along at a more natural pace. This allows for a strong bond to form, even when both of their futures are up in the air.

There’s just the right amount of hockey in the story to satisfy fans of the game without becoming excessive for those readers who picked this book up more for the romance side of things.  Roman has a strained connection with his new team, and though at times he seems to make progress becoming more friendly with them, it’s not always easy when he’s so used to having his defenses set on maximum.  His character winds up experiencing plenty of growth as he learns to let others in.

A well balanced story that kept me smiling while I read—not to mention hungry after reading about all the homemade food Roman makes—Shots on Goal was an overall 4.5-star read for me.  This book is meant for readers 18+ for adult language and sexual content. 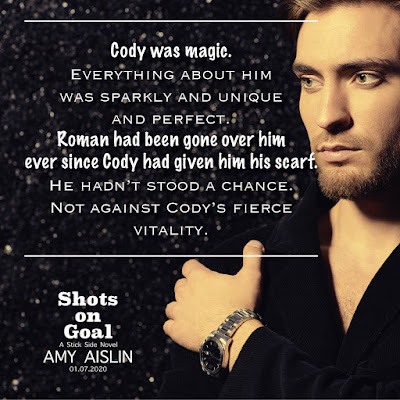 Amy's lived with her head in the clouds since she first picked up a book as a child, and being fluent in two languages means she's read a lot of books! She first picked up a pen on a rainy day in fourth grade when her class had to stay inside for recess. Tales of treasure hunts with her classmates eventually morphed into love stories between men, and she's been writing ever since. She writes evenings and weekends—or whenever she isn't at her full-time day job saving the planet at Canada's largest environmental non-profit.

An unapologetic introvert, Amy reads too much and socializes too little, with no regrets. She loves connecting with readers. Join her Facebook Group to stay up-to-date on upcoming releases and for access to early teasers, find her on Instagram and Twitter, or sign up for her infrequent newsletter here.

Giveaway!
Winner’s choice of ONE signed paperback from Amy’s backlist!