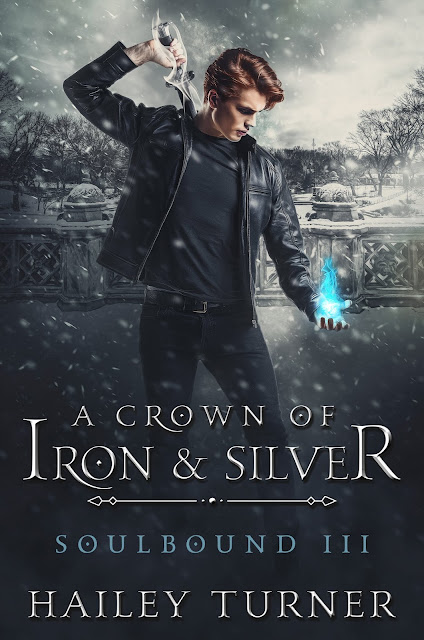 A Crown of Iron & Silver
by Hailey Turner

Never promise a life that isn’t yours to give.

New York City is decked out for the holidays, and Special Agent Patrick Collins is looking forward to a reunion with his old team when he gets assigned a new case. A human child is missing, and the changeling left in her place causes a prominent witch family to demand justice from the fae.

Meanwhile, continued harassment from the New York City god pack forces Jonothon de Vere to formally establish his own with Patrick. Doing so will mean a civil war within the werecreature community—a war they risk losing from the start without alliances. Making bargains with the fae is never wise, but Patrick and Jono have nothing to lose when a fae lord comes asking for their help.

The Summer Lady has been kidnapped from the Seelie Court, and if they can find her, Patrick and Jono will cement an alliance with the fae. But the clues to her disappearance are found in Tír na nÓg, and the Otherworld has never been kind to mortals.

Venturing past the veil, Patrick and Jono risk losing territory, time, and their very lives while searching for answers. Because the Queen of Air and Darkness knows they are coming—and the ruler of the Unseelie Court has an offer for them they can’t possibly refuse.

A Crown of Iron & Silver is a 107k word m/m urban fantasy with a gay romantic subplot and a HFN ending. It is a direct sequel to All Souls Near & Nigh. Reading the prior books in the series would be helpful in enjoying this one.

Patrick led him back into their bedroom, ignoring Jono’s huff of laughter when Patrick pushed him onto the bed. He shrugged out of his own jacket and stripped out of his sweater, tossing it aside. His dog tags were warm from body heat, even if he couldn’t feel where they rested on his scarred chest.

Jono watched Patrick undress the rest of the way, methodically getting rid of his weapons and clothes. He crawled onto the bed, pushing at Jono’s shoulders until he was lying down, with Patrick straddling his hips. Long fingers curled around his dog tags, tugging at the chain to pull him into a kiss that went from lazy to deep in the span of seconds.

Warm hands gripped Patrick’s hips, thumbs pressing against bone. Patrick bit down gently on Jono’s bottom lip before pulling away, dragging his mouth over the stubble along Jono’s jaw, to his throat.

“They drew first blood, and I don’t like that it was yours,” Patrick murmured against the skin stretched taut over Jono’s pulse.

He could feel it when Jono swallowed, and he tried his hardest to suck a bruise against Jono’s throat.

“Better mine than yours.” 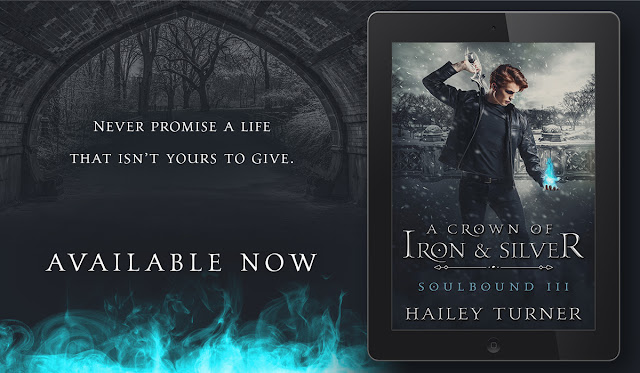 How do you do research for your books?
HT: A lot of reading! Especially for mythology. I have some books that I consult at home, sometimes I go to my local library, and I do a lot of online research.

Is writing your full-time career? Or would you like it to be?
HT: Writing is not my full-time career, and I’m one of those writers who really loves her day job, so I’m in no rush to try to make it a full-time career. Balancing two jobs can be tricky though, and some days I wish I only wrote full time! But I have no plans to do so at this moment.

Are you on social media and can your readers interact with you?
HT: I am on social media! I can mostly be found in my Facebook readers group, Hailey’s Hellions, where I post a lot of teasers and give updates on my books. I have an Instagram account where half the pictures are book-related and the rest are my cats. I love chatting with readers.

If you’re planning on picking up this title in the hopes of finding the same level of excitement, suspense, incredible world building, and amazing characters…plan on having your mind blown even more than it was with the first two books.  This time around, while there is still the open-ended continual threat from the god pack alphas that have been giving Jono grief from the start of the series, now the fae are bringing up a whole new round of problems in his and Patrick’s lives—oh, and of course the Dominion Sect is popping up again…as if our guys don’t have enough problems with which to deal.

Are you ready for and intense, I-can’t-put-this-down, constant edge of your seat read?  I sure hope so, because once you start things aren’t going to let up until the very end.  You’ll finally be able to breathe easier once you’ve finished—this is one of those stories where you feel like you’re right in the thick of things with the characters, and you won’t be able to relax until they can too.

Speaking of characters, the majority of those we’ve met so far in the first two books return here, but there are also a slew of new ones entering the fray with the addition of the fae and the trouble they bring along with them.  There were quite a few new names from mythology—this time primarily based on figures from the British Isles, most of whom I’d not heard of before so I was doing a lot of name searches to see what kind of stories and backgrounds were associated with them.  And of course when the fae are involved, the intrigue level spikes up with their craftily worded agreements that can open up pitfalls when you least expect it.

We also get to see Jono and Patrick’s bond deepen even more, and the dynamics of their pack evolve with changes that happen here in this story.  Everything is not resolved in this book—there are still several more-than-loose ends floating about, pointing to more in the series as things continue to escalate.  With the magnificent world the author has created and the excellent writing, this entire series is an absolute must-read for any urban fantasy fan.

A Crown of Iron & Silver was a 5-star read for me, and the series is on my Top Recommendations list for the genre.  I would strongly recommend reading the stories in order as certain aspects do build up from the first book, and you’ll want the background to build on as you read.  This story is meant for readers 18+ for adult language, some scenes of violence, and sexual content.

Hailey Turner is big city girl who spoils her cats rotten and has a demanding day job that she loves, but not as much as she loves writing. She’s been writing since she was a young child and enjoys reading almost as much as creating a new story. Hailey loves stories with lots of action, gritty relationships, and an eventual HEA that satisfies the heart.


Newsletter:  You can keep up with Hailey's future projects by joining her newsletter, where you can instantly download several free short stories:  http://eepurl.com/cAEejL

Win one of two back catalog ebooks by Hailey Turner! Open Internationally. Must be 18 to enter.