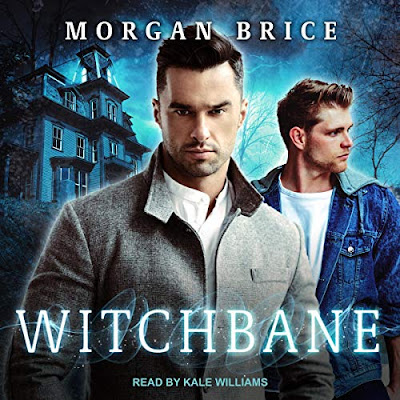 He’s used to risking his neck. He never intended to risk his heart.

Seth Tanner and his brother Jesse's fun evening debunking local urban legends ends with Jesse's gruesome murder. Seth vows revenge on Jesse's killer - too bad the murderer has been dead for a hundred years. Seth uncovers a cycle of ritual killings that feed the power of a dark warlock's immortal witch-disciples, and he's hell bent on stopping Jackson Malone from becoming the next victim. He's used to risking his neck. He never intended to risk his heart.

Witchbane is the first M/M book by this author, and I have to say I was impressed with what a great job she did with this story.  I was already expecting the great writing, and thought the suspense levels were just right (love it when I’m on the edge of my seat!).  The creepiness factor got me—there were some points I had to switch the light on in the room before I’d read any further.  And the romance between Seth and Jackson was hot and intense with the perfect amount of conflict to help raise the suspense of the story at the most opportune point (or inopportune if we’re talking about Seth and Jackson’s view of it).

The story starts off with Seth and his brother, and the events that occur when they go out to debunk a local myth set up an intriguing backstory for this series.  The scene is powerful and gruesome, setting the tone for what’s to come.  After what happened with his brother, Seth is on a path of revenge, and becomes focused on bringing down the warlock behind his brother’s death.

Jackson doesn’t realize he’s in danger, and Seth is determined to make sure what happened to his brother doesn’t happen again.  The attraction between them is not what he expected, but the pull between them is unmistakable, growing more passionate every moment they spend together.  The physically intimate scenes are heat-filled and sexy as hell.

The author maintained a continuous high level of suspense throughout the story—I didn’t want to take a break while reading because it always felt like something exciting was coming next…even when something exciting just happened.  That constant state of “oh my god what’s going to happen???” made for an intense read, and it felt like it was down to the wire with whether Seth and Jackson would prevail.

Witchbane was a very strong 4.5-star read for me, and an excellent start to the series.  While not the author’s first book, it was her first M/M story and she really did nail it.  I can’t wait to read more, and I definitely recommend this story to any M/M fan, particularly if you love paranormal and/or urban fantasy.  This book is meant strictly for readers 18+ for adult language, some physically gruesome scenes, and scorching sexual content.

The narration: I’ve found with Kale Williams that he tends to have a lower level of differentiation between characters voices than other audiobook narrators I usually listen to.  But his ability to inject emotion into those voices and portray the feeling of a scene allows me to still enjoy his narration.  His buildup to the suspense of the major confrontation near the end of the story was spot on, and overall I would give the narration of Witchbane 4 stars.

She writes the Witchbane and Badlands series. Watch for new series, coming soon!