Review, Excerpt & Giveaway: AS BIG AS THE SKY by Amy Aislin 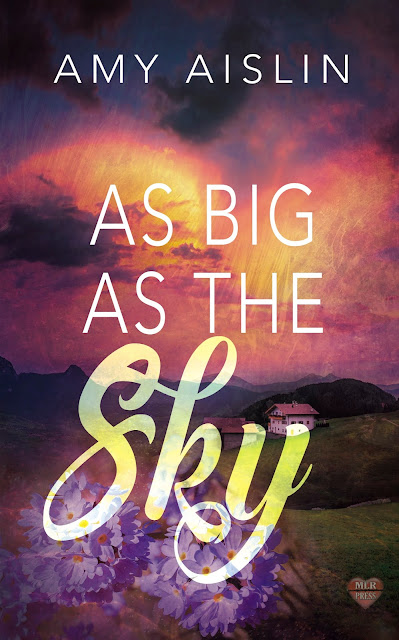 Sam wants nothing to do with his irresponsible, sarcastic neighbor...or does he?

Sam McAuley is having a rough start to the summer: Not only is he being sued, but the new guy running the animal rehabilitation center next door has no idea what he's doing and his runaway chickens constantly end up in Sam's pristine yard.

Everything is temporary for Bo Novak. For as long as he can remember, it's been one town to the next, one school to the next, one job to the next. Even his current job-running his sister's animal rehab center while she's away on a four-month leave-is temporary. And he does know what he's doing, thank you very much. Sure, things don't always run smoothly, but the stick-in-the-mud next door could be a little nicer about it.

One overheard conversation, an olive branch, and a baseball game might show these guys that being at odds isn't really what they want, and that what they want might just be each other.


The chicken was in his yard again. Ugly red wattle dangling beneath its beak like loose jowls, brown feathers puffed in an inflated sense of superiority. On any other day Sam normally wouldn’t have cared so much about the mess it was making of his garden, but this was the third time in as many days, the magazine crew would be here within the hour, and he’d told Bo to fix his damn fence.

Sighing, Sam set his mug on the counter. He really hadn’t had enough coffee yet to deal with this.

He walked out of the kitchen and down the hall to the front door, where he put on a pair of flip flops before exiting his house. Down the driveway, a left at the tiny gravel sidewalk, around the hedges in Bo’s yard, up Bo’s driveway. The early June sun pierced his eyes. He knocked on the front door and waited for Bo to answer.

Ever since Bo had taken over running Big Sky—the animal rehabilitation center next door to Sam’s—four weeks ago from his sister, Laura, it had been one disaster after another. Damaged enclosures, a pygmy goat with diarrhea, equipment that didn’t work, flooding in the cows’ pen after a bad rainfall, a yappy pair of not-quite-housebroken puppies. And now? Broken fences and runaway chickens.

The door opened, revealing a rumpled Bo dressed in old jeans, hiking boots, and a T-shirt streaked with dirt. He was out of breath, as if he’d run to the front door. The pair of dirty work gloves in his hand told Sam he’d probably been working out back.

The unsure smile on Bo’s face turned into a scowl when he saw who stood on his doorstep at nine in the morning. Sam ignored how cute Bo’s frowny face was and drew himself up to his full six-foot-three height. Bo was not his type. Too short, too lean, eyes too brown, hair too blond. Too flaky, too temperamental, too feisty, too…too much.

Nope. Not Sam’s type at all.

Bo’s hands went to his hips. He looked like a knight defending his domain. A tiny, skinny one with a bad attitude.

Sam held up a hand, cutting Bo off. “Look. I know you know what day it is. The crew’s going to be here in less than an hour. The last thing I need is your chicken masquerading as a prison escapee messing up my garden.” Bo’s lips twitched at that, but Sam ignored how that made him feel and continued. “Fix your goddamn fence. And get your chicken out of my yard.” Bo opened his mouth to speak but Sam didn’t give him the chance. He turned and descended the porch steps. “Oh.” He turned back to find Bo still frowning at him, lips pressed in a tight line. “And if your chickens keep escaping, maybe there’s something wrong with the chicken coop?”

The slamming door at his back was surprisingly satisfactory.

As Big As The Sky is my first exposure to this author, and she’s definitely got me hooked.  After all, she made me happy-sigh not just once, but multiple times while reading this sweet story with a nice touch of heat.  I loved the characters—yes, I say that about many characters in books I read, but my goodness these two…and there goes another happy-sigh.  The story is relatively low-angst, is written so smoothly that you don’t even realize the time passing by, and Sam and Bo’s relationship never felt rushed to me.

Bo is loyal, dependable, and willing to help and support others.  He may not be sure where he wants his future to lead him, and may not have had the best role models as he was growing up, but he’s enjoying that journey nonetheless.  Sam is a successful graphic designer (and more), and the ease of how he and Bo fit together was wonderful to read.  Their relationship develops naturally, and honestly I hope that my next one goes just like theirs—sweet, comfortable, yet with just the right amount of passion.

I was a little peeved at Bo’s sister, she’s kind of selfish and condescending when it comes to Bo, something that is actually quite undeserved.  Her attitude made me love Bo even more, and I wasn’t even sure that was actually possible.  Quite the opposite of her was Sam’s entire family, who was completely accepting and supportive, and made Bo feel right at home from the start.

As Big As The Sky was such a joy to read, and it’s getting a full 5 happy-sigh stars from me.  I highly recommend this book to every M/M romance fan, I’m pretty sure most of you will have a smile on your face after reading this just like I did.  This story is meant for readers 18+ for adult language and sexual content.

Amy started writing on a rainy day in fourth grade when her class was forced to stay inside for recess. Tales of adventures with her classmates quickly morphed into tales of adventures with the characters in her head. Based in the suburbs of Toronto, Amy is a marketer at a large environmental non-profit in Toronto by day, and a writer by night. Book enthusiast, animal lover and (very) amateur photographer, Amy's interests are many and varied, including travelling, astronomy, ecology, and baking.