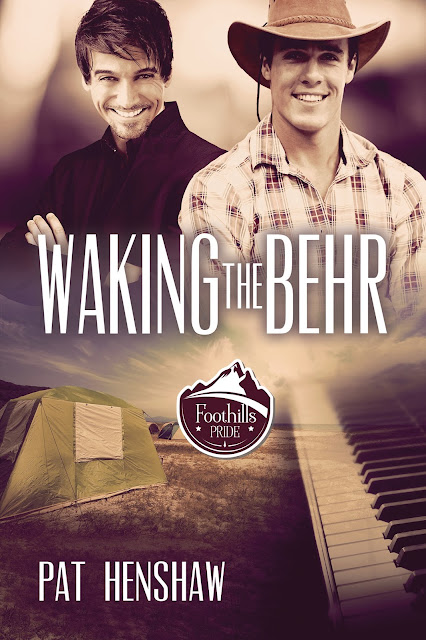 Both Ben and Mitch think they know exactly what they want. Turns out, they don’t even know their own hearts.

Good old boy Ben has dated women his entire life, while gay nightclub owner Mitch has never considered unsophisticated country boys his type. But after they start hanging out, the small-town contractor and the urban entrepreneur are both stunned by the electricity sparking between them.

As they step outside their comfort zones to spend time together, Mitch finds he enjoys rural car rallies, and Ben is intrigued by the upscale bars Mitch owns in San Francisco. When they share their lives and grow closer, they start to question the way they’ve always defined themselves. Then they kiss and fling open the door to love. Now they must step up and travel the road that may lead to happily ever after—even if that path isn’t one they ever expected to walk.

(From Ben Behr’s point of view. Contractor Ben has signed up new client Mitch O’Shea and is going to lunch with him outside Stone Acres, California, at the Rock Bottom Cafe in the Sierra Nevada foothills. Mitch has nicknamed his custom-made muscle car Rita.)

Driving Mitch’s Rhino GX up to the Bottom was every good old boy’s wet dream. The thing greedily gobbled up the road. A couple of times I felt like I was holding it back with a thin piece of rope that was on the verge of breaking.

Mitch, the bastard, laughed at me the whole way.

“Let her have some head.”

“Can’t. We’re coming up on a couple of tight switchbacks. Don’t want us to go off the road before we’ve had lunch.”

Easy enough for him to say. I was sure glad I hadn’t let him drive. We’d have been careening all over the place and probably would’ve had a lot more near misses.

I could just imagine my cell lighting up with calls as we passed some of my friends in their trucks. I felt them all staring at Rita as we flew by.

“You could have let her go,” he grumbled after we parked at the Bottom.

My hands were shaking from exhilaration. My zillion-dollar smile had to be glowing. F*ck. A guy could come just from driving this baby.

“Whatever,” I mumbled, because I really didn’t have any words at all. I had no native language at that point. I was cruising on the blissful release of having danced with Rita.

As we rounded the corner of the parking lot and headed for the front door, my brother Connor nearly bumped into me.

“What the f*ck is that thing, Ben?” He was practically panting as he took in Rita.

“Well, damn me. There are two of you beauties,” Mitch whispered close to my ear.

They stared for a split second before Mitch thrust out his hand and Con grabbed it.

They stood much too close, in my opinion, as Mitch listed Rita’s specs.

Not that I was jealous or protective or anything. I mean, Mitch had said he was gay, and Con definitely was. So they were a perfect match, right?

Are you kidding? my d*ck sneered.

My gut screamed that Con was encroaching, which was really weird. It wasn’t like I had any real designs on Mitch. I mean, I’m straight, even though I was between women and didn’t really feel like hunting down another one at the moment.

True, none of them made me want to run my hands all over them, though. Which was beside the point, right?

I nodded, but Con didn’t acknowledge me.

“Mind if I join you?” he asked, staring at Mitch.

Couldn’t he tell he was the third wheel at this party?

I shrugged, and Mitch nodded. I had no clue what the nod meant.

Lorraine, the Bottom’s co-owner, latched on to us near the hostess stand, scooped up three menus, and said over her shoulder, “Right this way.”

Connor was having lunch with us, then.

“Let me give you a quick overview about the roadhouse, Mitch. Then you’ll have some basic info to think about. Okay?” This was a working lunch, right? So I’d best be acting businesslike.

Mitch nodded, and Con, fortunately, figured out what was going on and shut the f*ck up.

After we ordered, I walked Mitch through the building’s long list of minuses and its one plus—it was a sturdy old bugger. He told me he’d get back to me about what he was going to do. I had a feeling he’d already decided and was going to call the Realtor to make an offer once we were back in town. You don’t often find guys dancing around like crazy idiots who don’t already have their minds made up.

As we ate, I watched Mitch and Con chat. I sat there and mentally took notes on how gay guys flirt. If nothing else, I guess I could chalk lunch up as a learning experience.

Pat was born and raised in Nebraska where she promptly left the cold and snow after college, living at various times in Texas, Colorado, Northern Virginia, and Northern California.  Pat enjoys travel, having visited Mexico, Canada, Europe, Nicaragua, Thailand, and Egypt, and Europe, including a cruise down the Danube.

Her triumphs are raising two incredible daughters who daily amaze her with their power and compassion.  Fortunately, her incredibly supportive husband keeps her grounded in reality when she threatens to drift away while writing fiction.