A non-Disney vacation? Blasphemy! But oh so relaxing...

Every now and then I go on vacation---to somewhere other than Disney World.  Shocker, right?  I wasn’t planning on doing anything over Memorial Day weekend but my mom asked if I wanted to join her at her favorite vacation spot so I decided to tag along.  I didn’t go far...just went over to the west coast to Sanibel Island.  I left after work on Friday (we got out around 1:30pm) and went home Monday afternoon.
When I was a kid our parents would take us over to Sanibel and Captiva Island every now and then.  Now, both my mom and my brother go over once or twice a year and stay at a condo place on the beach (gulf side) called Sanibel Arms West which is where we were for this trip.  We had a nice 2-bedroom/2-bath condo.  We weren’t right on the beach, but it was just on the other side of the little parking lot...like maybe 50 feet away.  Yeah, close enough for me.
Driving in to Sanibel is pretty nice, you get to drive over the causeway which is three bridges hopping little land areas.  The first bridge is pretty steep (I certainly wouldn’t want to see it during a race!) so it looks like you’re driving up into the sky...so steep you can’t even see the buildings on the other side.  The next two are mostly flat.  When I was driving over the second one, I was passed by a pelican flying along the side of the bridge going the opposite way.  Then onto the island and a couple of minutes later I’m pulling in to my home away from home for the holiday weekend.
Friday night I was just all tuckered out from a busy week so just relaxed in the condo.  My mom made us dinner (nice perk of having a condo instead of a hotel room, a kitchen so you don’t have to pay to eat out every meal) and I wound up falling asleep just after 10pm.  I got to sleep a little over 9 hours before finally getting up in the morning.  After some breakfast I grabbed a chair, my beach towel and book and headed across the walkway down to the beach.  No worries--I was smothered in sunscreen and didn’t turn pink at all.  A few hours on the beach reading in the morning until the temps started to soar (we got all the way up to 93 on Saturday), then out for some island shopping before heading to the Jacaranda Restaurant for dinner...with a restaurant.com gift certificate of course.  They had some amazing olive oil infused with garlic and rosemary to dip our bread in (along with parmesan cheese...yum!).

Shortly after getting back from dinner we had a crazy storm-torrential rain, wind and lots of thunder and lightning.  Had a great spot on our screened in patio to watch the show. Early to bed again so I could head back out to the beach early...can’t believe I was already out there by 7:45 or so on Sunday. This time I had an umbrella for shade and stayed on the beach until noon.
Saw several people both Saturday and Sunday jogging on the beach, including some lady in a bikini and flip-flops jogging at a pretty good clip...IN FLIP-FLOPS.  Nuts.  One guy came by at about the same pace the marathon leaders passed by when I was working the water stop at the Disney marathon in 2010.  Me?  I had no desire to move any faster than a very...very...very leisurely stroll.  Maybe with another “very” in there.  I was even doing some shell-hunting.  For me, beach=relax.
Monday dawned a bit cloudy but I still went out to sit and read on the beach for a couple of hours before packing up to head back home.  It may sound boring to some of you--just sitting on the beach and reading for the whole holiday weekend, but for me it was pure relaxation. 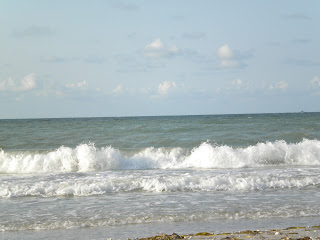 If you’re looking for a nice place to have a beach vacation here in Florida, I highly recommend Sanibel.  One thing to know before going though--this is very much a shell beach.  There are tons of beautiful shells all over the place (including small conch shells--but PLEASE check first before just grabbing them up, many still have the animals inside.  Please put those back in the water and move on until you find an empty one!)...so you may want to bring water shoes or wear sandals to walk the beach in-ones you don’t mind walking in the water while wearing.  Right by the water’s edge is usually better, but right before and right after there are shells everywhere so it can be a bit ouchie on your feet.  Regardless, it’s still a fantastic place to relax.
Don’t forget to walk all the way down to the lighthouse... 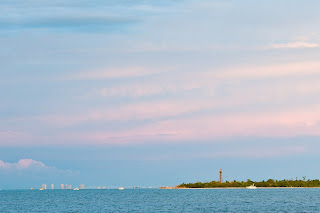 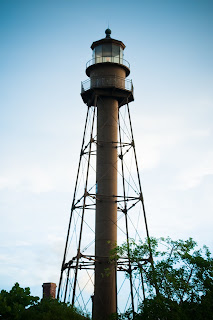