It is the first book in a series.

Fate doesn’t use dating apps to pair true mates...except when it does.

Human Omega Colin Soames has finally made it. Investors are clamoring for his new hit dating app and then things get weird. Now he’s on a mission to figure out who’s co-opting his app and why; by going undercover as a potential date. Little does he know that the oddities he discovered weren’t designed to sabotage the app as he first thought. No. Shifters have figured out a way to use it incognito, and he’s about to go on a date with one. If only he knew shifters existed outside of fiction.

Pack Alpha Bentley Shaw likes being single. He doesn't have to answer to anyone but his pack. He likes it that way even if he is lonely and even if his wolf is restless. Why bother putting your heart out there if you are only going to get hurt? But one drunken night he lets his Beta talk him into trying the new dating app all the shifters are using—just once. How bad could one date be? It couldn’t be worse than the time he tried to date a human—except that’s exactly what Love and Hate sends him.

Sparks fly, feelings grow, and their worlds are turned upside down in the very best of ways.

Matched To His Wolf is the first book in the sweet with knotty heat Dates of Our Lives M/M Mpreg Shifter Dating App romance brought to you by the popular co-writing duo of Lorelei M Hart and Colbie Dunbar. It features a human who stumbles into a world he never knew existed thanks to a silly little soap opera, an alpha who didn’t want to date—full stop, two powerful men trying to figure out how to come together as one, and an adorable baby. If you like your shifters hawt, your omegas strong, your mpreg with heart, and your HEAs complete with true mates and a bundle of joy, one-click today. 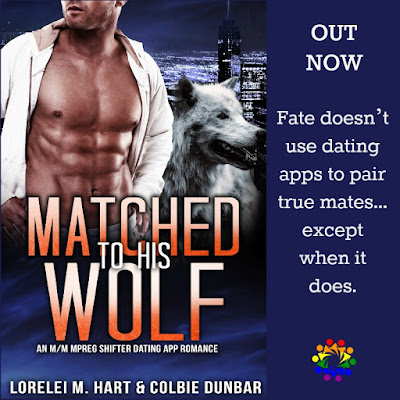 It’s from Chapter 5, and is the omega’s POV. His name is Colin. He’s human, and he’s the app developer. He goes on the blind date hoping to discover who's co-opting the app. His date arrives and it’s Bentley, a wolf shifter and pack alpha. But Colin had no idea shifters are real and of course, Bentley doesn’t enlighten him. The only context humans have re shifters is a famous soap opera, Shifter World, but they think it’s fiction.

“You’re not wearing a tie.”

“Ummm… nope. Is that a problem?” I glanced at the tie-less men seated in the restaurant.

Bentley loosened the knot at his throat, and I was mesmerized by the long, elegant fingers. He could be a hand model. He did look kinda familiar. I stared at his hands again. Maybe I’d seen them in an ad for watches, phones, or sexy underwear. My inner voice was voting for the last one.

My dinner companion slipped off the tie and stuffed it in his pocket. I was so desperate to check out his nether regions again, I was tempted to do the ‘drop-the-napkin’ trick and get a good gander at his crotch.

“Been here before?” Bentley asked as his amber eyes flicked over the room.

“Nope. But it’s got great ratings on Grassfed Reviews.”

He grimaced. Yeah, that’s what that was. “I don’t pay much attention to that sort of stuff. Too much crap online.”

Did he just put down the entire internet when he was on a blind date that happened by way of an app? My app! I think he did. What an ass! My hand gripped the steak knife wondering if I’d get probation if I stabbed it into the wooden table. Perhaps a warning, pay for the damages, and be blacklisted at the steak house? I could live with that.

But I reminded myself he had no idea I was the developer. “And yet here we are because of an app.”

“My friend convinced me to try it.”

His words reminded me I was supposed to have my detective hat on, not be ogling him or thinking of ways to destroy the furniture because of my bruised ego.

But his scent wafted over me, and if I lived in the 18th century, I swear I would have swooned. I didn’t really know what that was but it sounded like how I felt. All shaky and my stomach was jumbly. I gripped my glass and threw a mouthful of beer down my throat, but in my rush to not swoon, I choked.

The table and my date were showered with beer and probably saliva. Ewww! Bentley’s gray button-down was dotted with wet splotches and so were his hands, cutlery, and napkin. But while I was gasping and focused on not dying, he was suddenly behind me, pushing me forward and thumping my back.

“Okay?” he asked as I took the first breath in what felt like forever but was only a few seconds.

“Mmmm,” I nodded as my cheeks flamed.

“If I choke on my steak, I want him to give me first aid.” That was a comment from the next table.

“Sorry about the shirt,” I whispered as a waiter replaced the Bentley’s setting and took our orders.

Bentley shrugged as he said, “No big deal.”

I was at a loss for a conversation starter. We’d done names, discovered he hated the information superhighway, he’d saved my life, and I’d ruined his shirt and shared my DNA. Pretty impressive for the first five minutes.

But I was scrabbling for something to say and desperately trying to avoid his aroma which reminded me of an ancient forest that rarely disclosed its secrets. I pictured the trees, with their arms around one another as they closed ranks against outsiders. It was both intoxicating and hair-raising, and I stuck my hands in my lap so Bentley couldn’t see the goosebumps sprawling across my skin.

And then the same voice that had admired my dinner companion’s life-saving prowess said, “That Floyd. I followed him on social media and commented that I hope they bring him back for more episodes. ‘I wouldn’t count on it. Don’t hold your breath,’ was his response.” The guy tittered and placing both hands near his throat, made an exaggerated gasping sound while staring into my eyes. He’s mocking me.

“Hey,” Bentley stood and got in the other guy’s face. That was weird ‘cause I’d listed that as one of my hates on the app. He grabbed the omega’s shirt. “Apologize to my friend. That was completely inappropriate and you’re a jerk.”

The guy sniffed. I was convinced he was inhaling the alpha’s scent and his expression changed from overconfident to insecure. He shuffled along the booth and I swear he shrank to half his size.

His alpha companion muttered, “He meant no harm. Sorry,” before flinging a pile of cash on the table. The pair raced out, not looking back when the waiter arrived at their table with two sizzling steaks and yelled, “What about your dinner?”

He shrugged. “The guy was an ass.”

Lorelei M. Hart is the cowriting team of USA Today Bestselling Authors Kate Richards and Ever Coming now joined by their friend, Ophelia Heart. Friends for years, the three decided to come together and write one of their favorite guilty pleasures: Mpreg. There is something that just does it for them about smexy men who love each other enough to start a family together in a world where they can do it the old-fashioned way ;).

My characters are sexy, hot, adorable—and often filthy—alphas and omegas. Feudal lords with dark secrets, lonely omegas running away from their past, and alphas who refuse to commit.

Lurking in the background are kings, mafia dons, undercover agents and highwaymen with a naughty gleam in their eye.

As for me? I dictate my steamy stories with a glass of champagne in one hand. Because why not?

Follow the tour and check out the other blog posts here