Yesterday was a scheduled 7-miler.  Started out fine, 76 degrees but 86% humidity-though there was a slight breeze at first.  I was trying to get out ahead of supposed storms that were moving in.  I did have a light sprinkle for about 10-15 minutes and considered turning around and trying later, but turned to see a rainbow (can you see it?) and decided to just keep on plugging-might as well just get the miles out of the way early and have the whole rest of the day to myself. 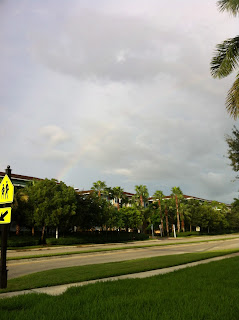 I did do small loops around my immediate area instead of my usual out and back that I prefer for anything over 4 miles so I'd be close to shelter.  Turns out that wasn't necessary, after that first sprinkle the rain stayed away.  Unfortunately, it did stay overcast...which is usually a good thing since it blocks our scalding sun, but when there's rain clouds around that means one thing-humidity.  Lots of it.  Meaning another sweat-fest of an outing.

Yeah, I'm used to it-SoFla native here ya know...but I prefer sweating from exerting myself, not from walking out the door just to stand outside.  Yes, there's a difference-humidity can really sap the life out of you which just makes the exertion part uncomfortable and very tiring.  Like, take a 3 hour nap in the afternoon tiring (yes, that's exactly what I did after we ran some errands).

Anyway, 6.93 miles in the books.  I am concerned though about pace.  Been having problems keeping up run intervals with all this humidity (makes it hard to breathe while running) which means overall pace has been horrible--bringing up big concerns for ToT.  Just keep swimming...right? Almost literally...
Posted by Making it Happen at 7:15 AM

Email ThisBlogThis!Share to TwitterShare to FacebookShare to Pinterest
Labels: Tower of Terror, training