You may remember last year for Memorial Day weekend I headed over to Sanibel Island, FL for some beach time with my mom.  This year, did the same thing except my brother also joined us (due to various reasons none of our spouses could make the trip).  I got out of work early from my “day” job on Friday so I made sure my bags were already packed so I could just toss them in the car and go.

Mom had gotten the same condo unit we were in last year at Sanibel Arms West again and my brother already had dinner going when I arrived (thanks Ran, it was yummy!).  Went for a walk on the beach after dinner and a little relaxing while the sun went down. 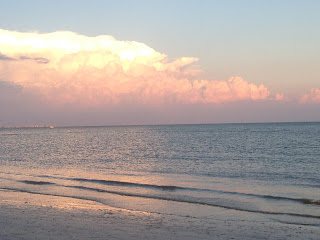 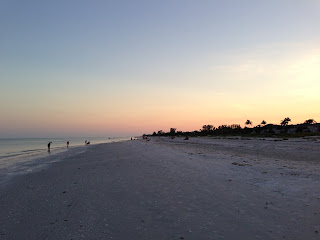 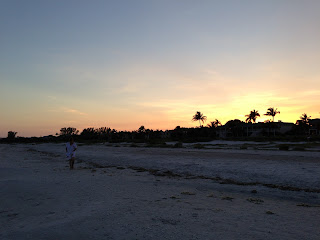 Lots of people had been writing things in the sand...one person had even drawn a HUGE floorplan of a house (you could tell by the things he drew in the rooms like furniture and appliances).  It was low tide and there were plenty of shells, though I only wound up picking up one--tiny, but it’s a stunner: 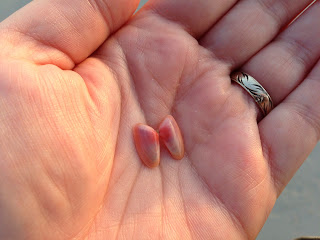 I was exhausted after a busy week at work (prepping for our annual open enrollment for benefits) so once the sun went down I crashed on the couch to relax and catch up on email and other computer stuff.  I wound up sleeping about 9 hours straight that night so I missed the sunrise Saturday morning, but I really needed the rest.  We went off the island Saturday to do some outlet shopping and have lunch.  Once we came back we stopped at a popular ice cream shop on the island called Pinocchio’s (located of course inside Geppetto’s market) where I came across their totally YUMMY “Dirty Sand Dollar” flavor.  Couldn’t pass it up--caramel, malted milk balls and chocolate chunks in a vanilla-based ice cream, sooooo good!  Oh, and every creation they serve comes topped with an animal cracker :-) 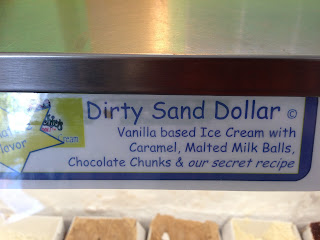 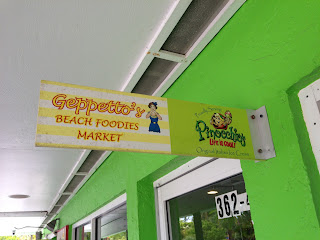 Got to bed at a decent hour so was able to catch the sunrise Sunday morning: 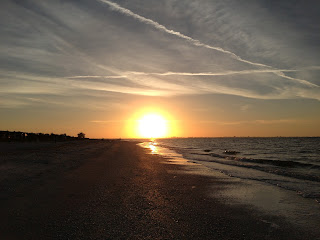 And got two fun pics of me and mom on the beach (sadly, my brother had to leave that morning since he had to get back to do prep work for his cafe for the following week): 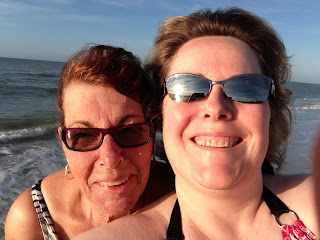 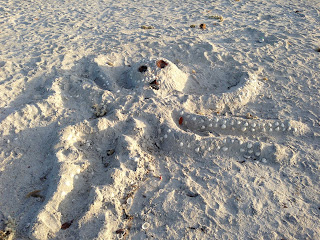 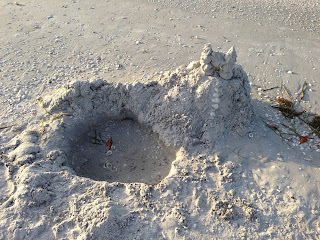 Highlight of the morning?  Dolphins!  They were swimming in really close to shore (probably for the little bait fish that swim close in), I took these pics without the zoom from right at the water line: 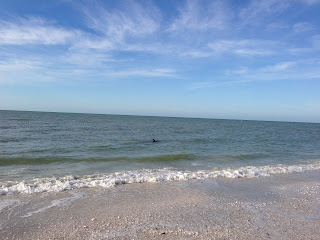 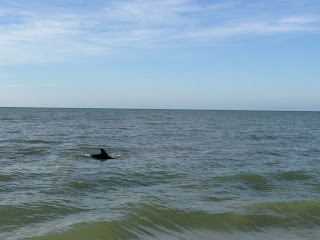 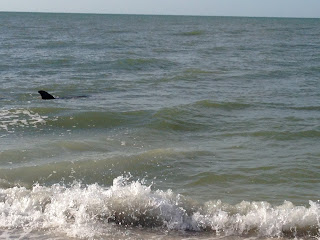 It was nice to see many people running/jogging/powerwalking on the beach.  Me?  No.  This mini-vacation was for me to relax, relax, relax.  No work, no exercise, no nothing-I even forgot to bring a book to read so just sat in my comfy chair under my canopy tent (which I put up all by myself) and watched the water and the people...and the dolphins of course.  No thinking, no stressing.  Perfect. 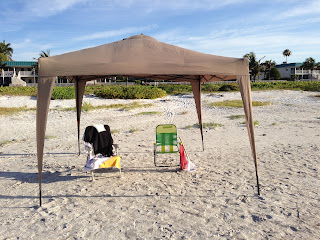 After seven hours on the beach (!) we relaxed in the condo before heading out to dinner at Jacaranda.  I had gotten a $25 certificate from restaurant.com before the trip so we had a really great meal for a great price: 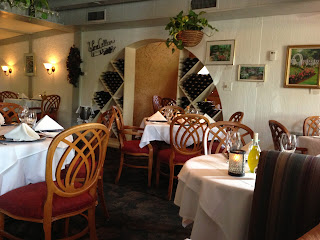 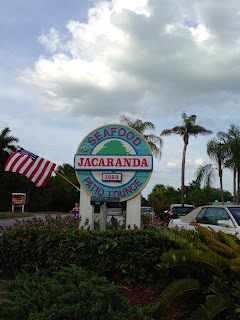 The only downside to Sunday?  Since I had put my tent up and wasn’t planning on being out in the direct sun, I didn’t put any sunscreen on my legs.  Normally they almost never burn, never tan-really, even as pale as I am, don’t know why...I mean, it takes me ages to even get a sock tan when race training.  You can probably see where this is heading, right?  Well, my tent isn’t a heavy canvas, it’s a more airy, breathable fabric...and apparently doesn’t block the sun’s rays very well as this is what I wound up with: 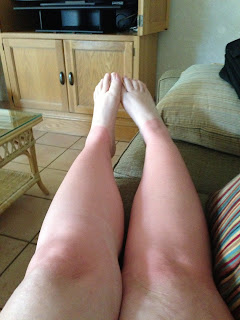 No lectures necessary, I already know.  It’s much better now, though I’m dreading the peeling part.  And even though the pic of the tent I posted shows the sun getting under it, that pic was from early morning when the sun was coming from the side-didn't take long for it to get high enough so the tent was casting shade on my legs.  So remember folks, even if you’re going to be under a tent, PUT THE SUNSCREEN ON.  Seriously.

Anyway, Monday dawned a bit cloudy so that made leaving to go back home to reality a bit easier.  It was a nice weekend spending time with my mom and brother, something I don’t do very often.  I’ll leave you with my favorite sand writing from the weekend (which I also texted to DH the night I took the pic): 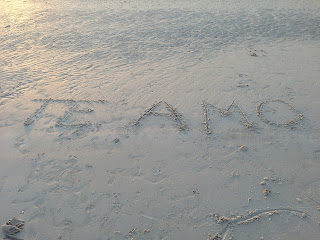 What did you do to relax over the holiday weekend?

PS-Don't forget to hop over to my other blog, The Disney World Files...I'm doing a fun giveaway for a Vinylmation figure!  Please also share with friends and family-the giveaway goes until June 28th so you have plenty of time to enter (and many ways to get entries) and help me spread the word for my WDW blog :-)  I'll be giving away a Vinylmation figure once a month for the next couple of months!  Good luck!