I’ve said before how the Expedition Everest Challenge is my all-time favorite Disney race (I have, right?), in fact it’s my favorite race anywhere so far.  Not because it’s “only” a 5K-I actually prefer the half marathon distance since the first 1.5 to 2 miles are always harder for me while I get into a groove.  It’s my favorite because it’s just that much fun.  You’ve got obstacles along the course...nothing really hard, after all-you are still at Disney; you’ve got characters on the course; you’ve got a cool scavenger hunt solving clues that take you all over Animal Kingdom; and then you’ve got the after-party once you’re done.  But this part 1 post is about my weekend activities before the race.

Back in January during Marathon Weekend I had volunteered at the expo and 5K (yes, I know I haven’t recapped that trip yet but I will soon...I promise!).  I’m kinda getting into the volunteering thing-it’s fun and a great way to give back to other runners.  And so I kept watch on Disney’s volunteer site until the day volunteer registration opened, then registered to work a shift on Friday at the expo from 10am-3pm as well as a shift at the Family Edition race.  I drove up early Friday morning, got checked in to Pop Century so I could drop off my bags, then headed over to Wide World of Sports (WWoS) for my expo shift.


Once I got to WWoS, I checked in at the stadium’s 2nd level, got my t-shirt and snack box as well as my assignment.  They were trying something new by having queue lines set up at the tables where you picked up your bib and race shirts.  Apparently they wanted people to go in one way and come out another, and those of us assigned to the queue lines were supposed to guide people into the lines.  Um, yeah...that didn’t work.  No one wanted to listen to us.  Thankfully, it didn’t get too crazy.  A little busy when the expo first opened, but after a little bit it died down to a steady trickle and since the tables were pretty spread out those of us working the lines were just kind of standing around, directing people and answering questions.  Once my shift was over, I headed back to my room for a short nap before heading over to the Magic Kingdom for some evening park time-which wound up getting pretty much washed out as it was pouring almost all night (I had my umbrella so I just kept on going thru the park...good thing about the rain?  Lots of people leave the park so there’s short lines).

The following morning I was up early to head over to WWoS for my second shift as a volunteer.  I would be working the Family Edition race this time.  A group of us were led out to the track where the kids race area was set up.  Together we helped set up the rack holding all the medals for both the Kids’ Races and Family Edition race.  I would be working the refreshments table so those of us on that table went over to make sure everything was all set up.  It kept doing this misty-raining thing on and off so they gave us ponchos (I am now the proud owner of a Disney Parks poncho, I feel so touristy LOL).  Once the races started, I wound up handing out these little Toy Story gummy fruit snacks to all the participants.  It was so cute watching all the little kids running their miniature obstacle course.
Once they were done, the Family Edition started.  We had a nice little break in between while we waited for the groups to get over to the track after solving their clues so they could race to the finish line.  Once all the teams were in, we were done for the day.  The rain did finally clear up towards the end of the shift.  I picked up some lunch and headed back to my room to rest until it was time to head to Animal Kingdom for my turn at a race.
I have to say, volunteering at the runDisney races is pretty fun.  There’s always a great group of people to work with (both rD people and the other volunteers).  Several of the people I worked with Friday and Saturday volunteered Saturday night for the main race and I chatted with them for a little bit before the race started...they thought it was great that I was participating in the race and wished me luck.  If you ever get the opportunity to volunteer at a race, whether at an expo, water stop, finish line or any other station, I would highly recommend you try it-especially if you’re a runner/walker yourself.  Seeing the race from the other side is enlightening...you don’t really realize the scope of what is going on until you’ve been on both sides.  Oh, and if you volunteer for Disney races, your volunteer time accumulates and you earn a one day/one park admission ticket for every 16 hours you work (exception for marathon weekend in January--if you volunteer then for either the half or full marathon, that shift will earn you a ticket all by itself)...plus you get the free shirt (or jacket for the half/full marathons in January).  It really is a great experience.
I am hoping if I am unable to sign up for Tower of Terror (need my redemption, ya know?) this year, that I will at least be able to go up and volunteer.  And I’ll definitely be doing several shifts next January for Marathon Weekend again.  Hope to see some of you there!

Have you ever volunteered for a race (Disney or any other)?  What did you think about the experience?

PS-there was a cute little otter in the pond behind our refreshment station that kept popping up near the shore: 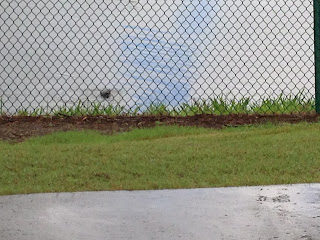