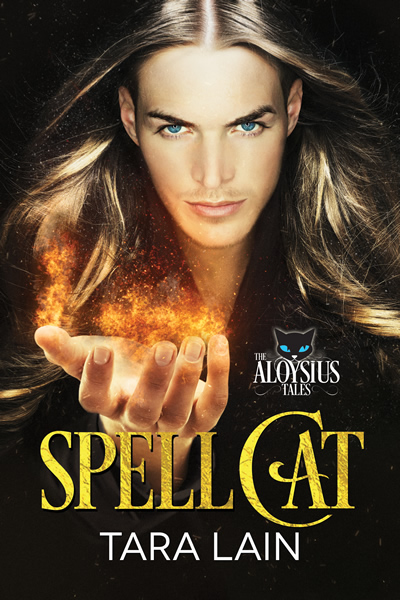 When Killian Barth, history professor, meets Blaine Genneau, quantum physicist, they ignite their own big bang. But Killian can’t pursue a physics professor—or a human. As the most powerful male witch in ten generations, Killian must bolster his dying race by reproducing—despite the fact that he’s gay.

Even a fling with Blaine is out of the question, because Killian has been told sex with humans drains his power. But if that’s true, why can young human Jimmy Janx dissolve spoons with the power of his mind? If Killian can sort through the lies he’s been fed, he’ll still face his biggest obstacle — convincing rational scientist Blaine to believe in magic.

With his ancient and powerful cat familiar, Aloysius, on his shoulder, Killian brings the lightning against deceit and greed to save Blaine from danger and prove love is the greatest power of them all. 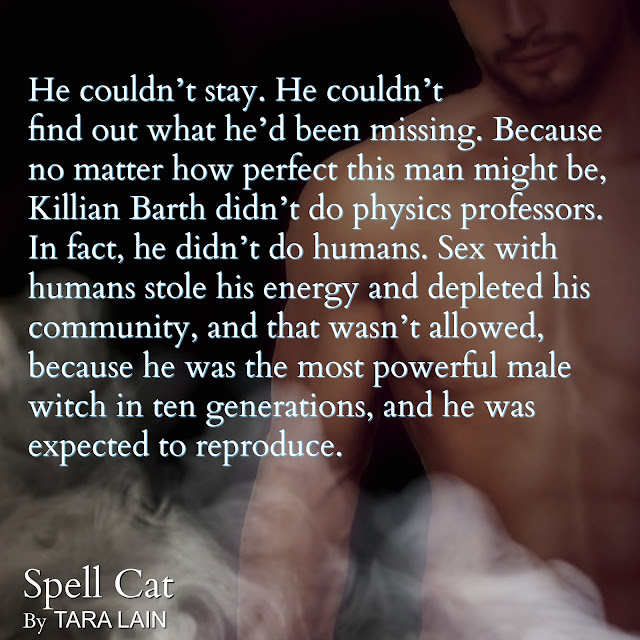 Blaine was standing at the end of the counter a few feet away, staring at Killian.
How long could a witch live with his heart stopped?
Oh gods. He understood. Heat. The way he felt this moment dwarfed every emotion he’d had with Moran by a thousand. A million. The chasm between indifference and… passion. His heart beat fast, his breath caught in his chest, and his eyes never wanted to look on another sight, just Blaine.
He ought to run, but whether away or straight to Blaine, he wasn’t sure.
“Mrwar.”
Blaine seemed to catch the welcome in that meow. He smiled and took a step closer. “Hi, Al. Good to see you, buddy.”
Aloysius unwrapped himself from Killian’s neck, did one bound off the tabletop, and launched himself into Blaine’s waiting arms. Oh Powers, would that Killian could do the same. He actually had to hold himself still, or he knew he’d follow the cat.
Blaine petted Al as the cat did his imitation of a moving fur coat, purring so loudly Killian could hear him, even a few feet away. “You seem happy to see me, anyway.” He looked up. “Are you happy to see me, Killian?”
Killian nodded. Correction—his head nodded. He had no power over it.
Blaine walked even closer. “Could I have lunch with you? Talk to you?”
The head nodded again.
The human slipped into the chair beside Killian. Sweet Powers, he smelled so wonderful. That sweet and spice together.
“This sure is one great cat. Where did you get him?”
Killian cleared his throat. “Gift, uh, a gift from my mother.”
Blaine chucked Al under the chin, and the cat let him. “My mother hates cats.” He looked up, and Killian swam into the pools of deep green. “Of course, my mother hates me, so she’s not likely to give me the time of day, much less a pet.”
“Surely not.”
He grinned. “That she hates me? Oh yeah. I keep defying her by choosing to be gay when her preacher has clearly cleansed me of this delusion at least ten times, so she washed her hands of me.”
“But you didn’t choose—Oh, you’re joking.”
Blaine’s grin faded. “I wish it were a joke. Then a lot of beaten-up, confused kids would have parents who loved and understood them.”
There were worse things than having a manipulative witch for a mother. “I’m so sorry, Blaine. I didn’t mean it like that.”
Blaine smiled. “I never thought you were making fun. I just have a weird sense of humor sometimes.”
Then he did it. He put his hand on Killian’s arm. Such a simple gesture. Flash! Heat blazed in Killian’s head, and hot steel filled his c*ck. Blaine started and pulled his hand away. Those green eyes widened, and he stared at Killian like he was either the answer to a dream or a cobra, and Blaine wasn’t sure which. “Holy sh*t!”
Killian tried to make sense of his brain synapses and grasped at the first thought. “Uh, food—did you want food?”
Blaine leaned over and whispered in his ear. “I want to eat with you and talk to you and sleep with you and take you home with me. But right now I want to make love to you so badly I’m having trouble focusing.”
There was that head nod again. Where the f*ck did that come from?
“Does that mean you want to make love to me too?”
Killian stared at Blaine, the human physics professor whose simplest touch could drain a witch’s power until his own mother didn’t know him and his people couldn’t benefit from his great sperm and—and all that dogma. The answer was yes. He did want to make love to Blaine. He wanted it more than anything. The evil witch voice piped up in his head. Yep, these humans are tempting. That’s how the witch race got so depleted. He was the strongest male witch in ten generations. That had to be worth something. He’d never had a really satisfying relationship with a man, even for a short time. He wanted one. Didn’t he deserve just a little happiness before he gave his life for his people? He’d tried it the right way, the witch-stamp-of-approval way, and nearly got his back broken for his trouble.
Blaine was staring at Killian like he was in suspended animation; only the fingertips that scratched Al’s head moved. There. That was it. Blaine had the best possible credentials. Aloysius, who was no dumb cat, adored the human… and so did Killian. Just that simple. He didn’t care if he rotted in witch oblivion, or if he lost some of his fabled power. How much damage could he do in such a little while? “Yes.”
Blaine came to life. “Excuse me?”
“Yes. Please take me home with you.” He swallowed. “And all those other things.”
Blaine’s smile lit like a midwinter bonfire.
“Mwrarrrrr, mrrrrrwarrrr, mrrrrwarrrr.”
The bloody cat was singing while he slithered around Blaine’s neck in some happy dance known only to strange and powerful blue-eyed familiars. 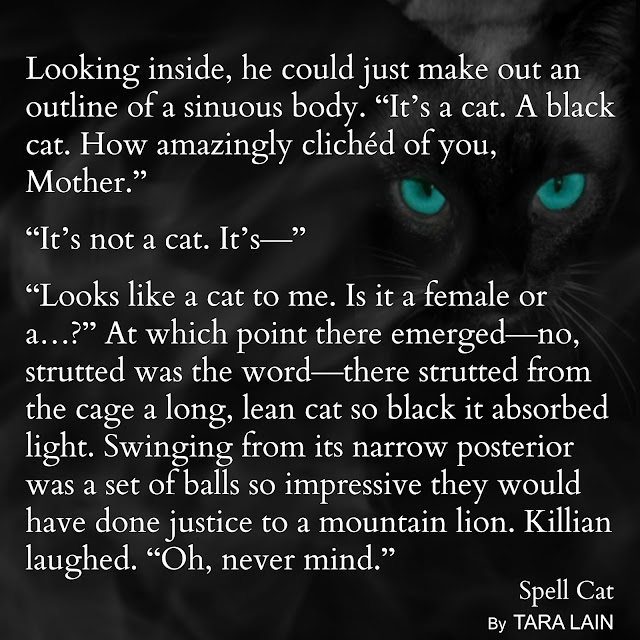 Nothing ticks me off more than those situations where a character is expected to act a certain way or do something they expressly do not want to do because of some familial or societal obligation (heck, not just characters but people in general).  No one should ever be forced into something they don't want, so when I'm reading a book where this is part of the storyline, you can damn well be sure that I'm rooting for just the opposite to happen, and for the character to get his or her own happy ending.  Add to this drama the paranormal aspect of witchcraft, spells and a familiar and that makes Spell Cat an obvious pick for me to read.

Thank goodness this is a paranormal romance, otherwise the instant attraction and speed of the relationship would have turned me off.  In a paranormal romance though, I can easily overlook this...but here in this story, how quickly Blaine escalates things (particularly the scene at the park near City Hall...sorry, I know that is a tease but I can't really tell you more without spoiling things)-even this is still a bit fast for me.  But the intense connection between Blaine and Killian makes up for a lot of this, and every scene they are in together the heat and want is palpable.

The story is mostly lighthearted, with a bit of drama injected when Killian faces the council-and I have to say at that point I was totally riveted to his character and his determination when it comes to getting Blaine back.  Considering that at times Killian's attitude can actually seem a tad immature considering his role as Witch Master, I expected a bit more from him...so the confrontation with the council really bolstered my opinion of him in the end.  The story also touches on some seriousness while it addresses the issue of discrimination-in this case witches versus humans, but the attitudes parallel just about any form of race/class discrimination. 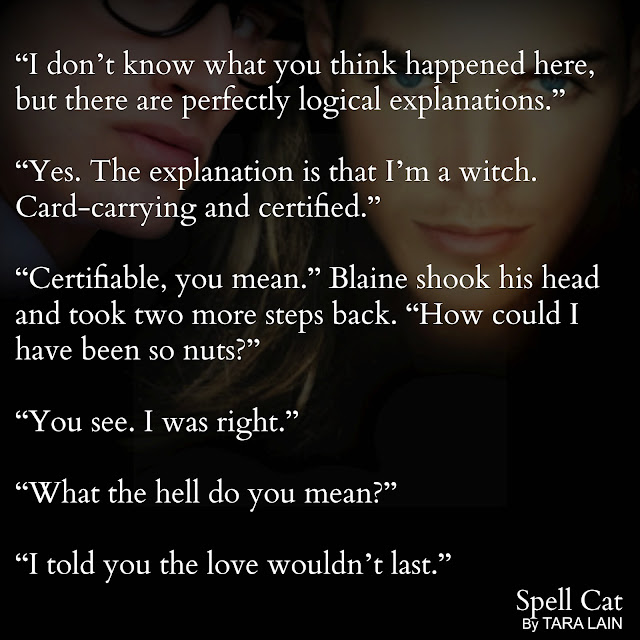 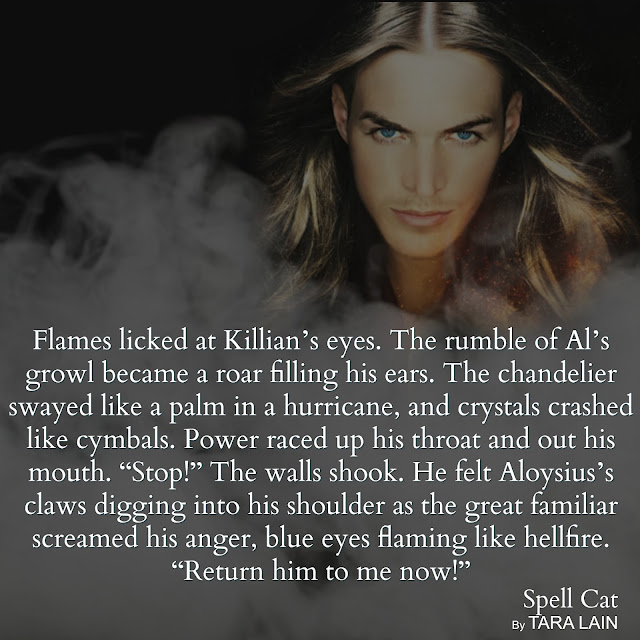 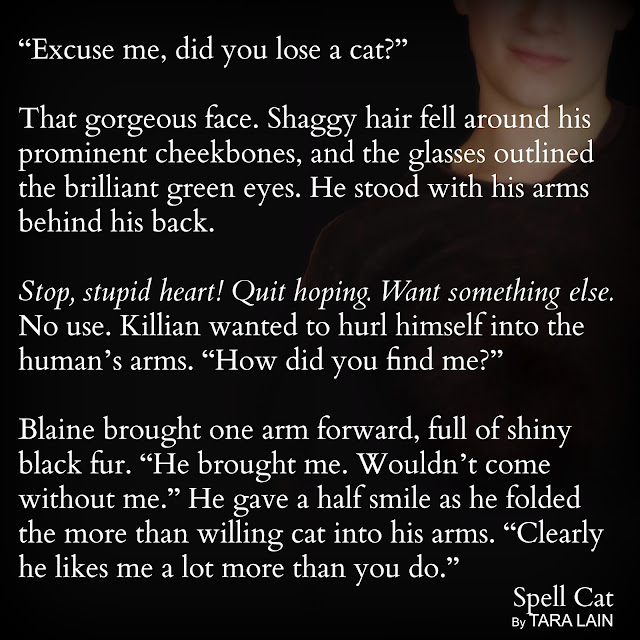