Review Tour and Giveaway: Flirting With Scandal by Chanel Cleeton 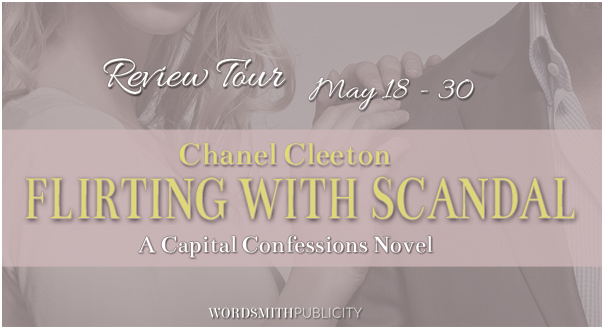 Flirting with Scandal
by Chanel Cleeton 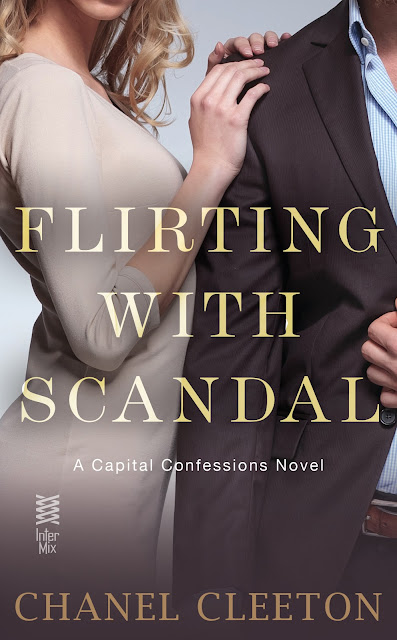 SYNOPSIS:
The author of I See London sets her sights on Washington, D. C., with a sexy new series about three sisters, the secrets they keep, and a powerful blog with a knack for exposing scandals...

Jackie Gardner knows all about dirty little secrets. The illegitimate daughter of one of the most influential senators in Washington, D.C., she grew up surrounded by the scandals and shadows of politics. Now that she's landed an internship with a powerful political consulting firm, she's determined to launch her career and take this city by storm.

William Andrew Clayton was born for politics. He knows the drill: work hard, play discreetly, and at all costs, avoid scandal. At twenty-six, his campaign for the Virginia State Senate is the first step to cementing his future. It's time for him to settle down, to find the perfect political spouse. He needs a Jackie Kennedy, not a Marilyn...

When Jackie meets Will in the bar of the Hay-Adams Hotel, sparks fly. But the last thing Will needs is to be caught in a compromising position, and an affair with a political candidate could cost Jackie her career. When what began as one steamy night, becomes a passion neither one of them can walk way from, they must decide if what they have is really love, or just another dirty little secret... 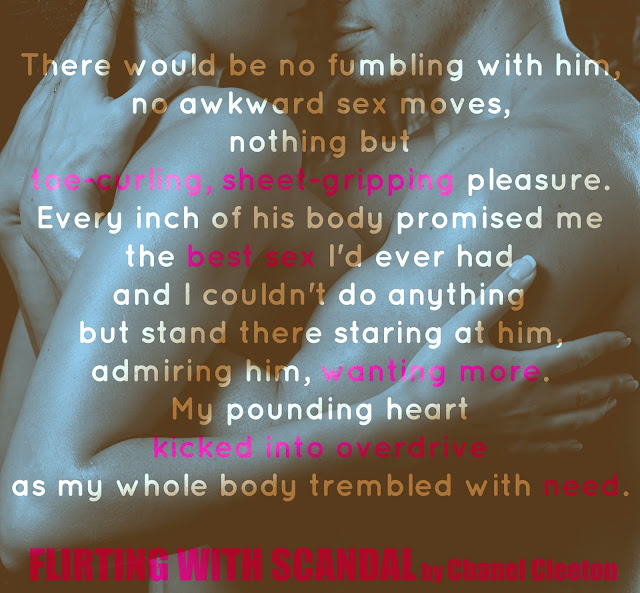 Scorching hot and wicked smart, Flirting with Scandal had me hooked from page one! Sizzling with sexual tension and political intrigue, Cleeton weaves a story that is as complex as it is sexy. Thank God this is a series because I need more!!
- New York Times bestselling author Rachel Harris

Chanel Cleeton knocked it out of the park with Flirting with Scandal. The banter was refreshing, the political storyline captivating, and the sexual tension was through the roof. Smart, emotional, romantic, and sizzling hot--this book is fantastic!
- Christina Lee, author of the Between Breaths series

Chanel Cleeton delivers again! Featuring a strong heroine, a steamy romance, and juicy dose of political scandal, Flirting with Scandal is completely engrossing. Clear your calendars--you won't be able to put this one down!
- Brenda St. John Brown, author of Swimming to Tokyo

An emotionally satisfying page turner, deliciously steamy and set against a complex political backdrop that yields satisfying plot twists and a hefty dose of scandal.
- Lia Riley, author of Upside Down

I'm not really a fan of politics, so stories that revolve around characters that are involved in politics in any way are usually not on my radar.  I'm really, really glad that I didn't pass over this one because of that...because Flirting With Scandal is fantastic!  Written to draw you in and keep you there, I was fully engrossed in the story the entire way through.

Jackie is a strong, tough young lady who knows what she wants and goes after it-keeping distractions in the form of men in politics away while she works on her dream career.  Enter Will, a young man with an impressive political pedigree who is genuine and truly wants to do the best he can for the people he hopes to represent.  It doesn't hurt that he's the most gorgeous, eligible bachelors around either.  Unfortunately for Jackie, she doesn't know who he is when they first meet...and sometimes that first meeting strikes a spark that will just not go out-no matter what rules she has set about men in politics.

The chemistry between Will and Jackie is phenomenal, but the secret she is keeping about who she is is hovering there in the background, just waiting to pop out at the wrong time...which keeps the tension going in the story, and kept me furiously flipping the pages.

A truly intriguing read, Flirting With Scandal was a 4.5-star read for me, and I'd recommend for 18+...especially those who enjoy political scandal stories.  This one is a keeper, and will wind up being one of those stories I wind up re-reading again and again.  I'm definitely looking forward to the other stories in this series! 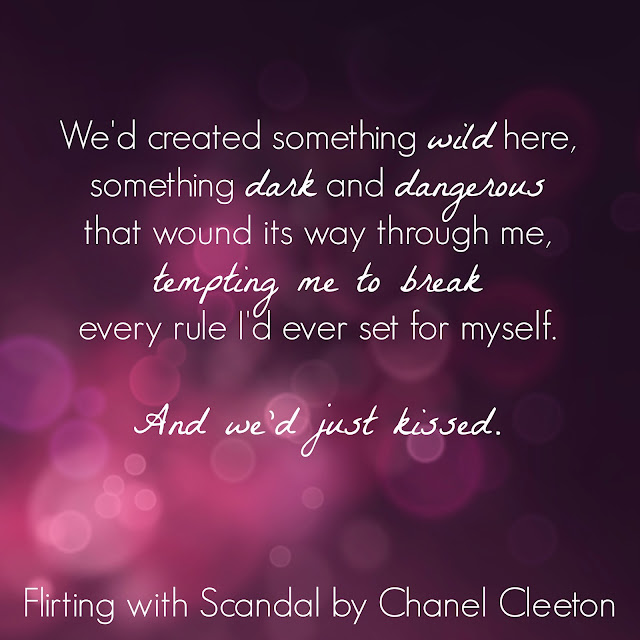 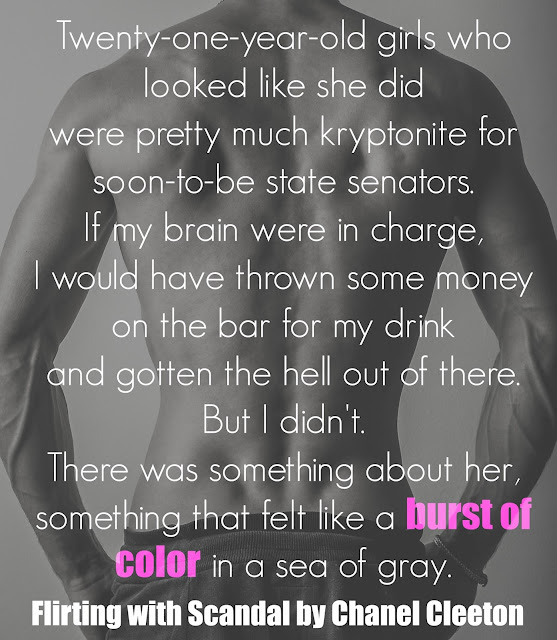 Originally a Florida girl, CHANEL CLEETON moved to London where she received a bachelor’s degree from Richmond, The American International University in London and a master’s degree from the London School of Economics and Political Science. Chanel fell in love with London and planned to stay there forever, until fate intervened on a Caribbean cruise and a fighter pilot with smooth dance moves swept her off her feet. Now, a happily ever after later, Chanel is living her next adventure.

Law school made Chanel realize she’d rather spend her days writing sexy stories than in a courtroom, and she hasn’t looked back since. An avid reader and hopeless romantic, she’s happiest curled up with a book. She has a weakness for handbags, her three pups, and her husband.

Chanel writes contemporary romances. She is published by Harlequin HQN, Penguin/InterMix, and Penguin/Berkley and is the author of the International School, Capital Confessions, and Wild Aces series. 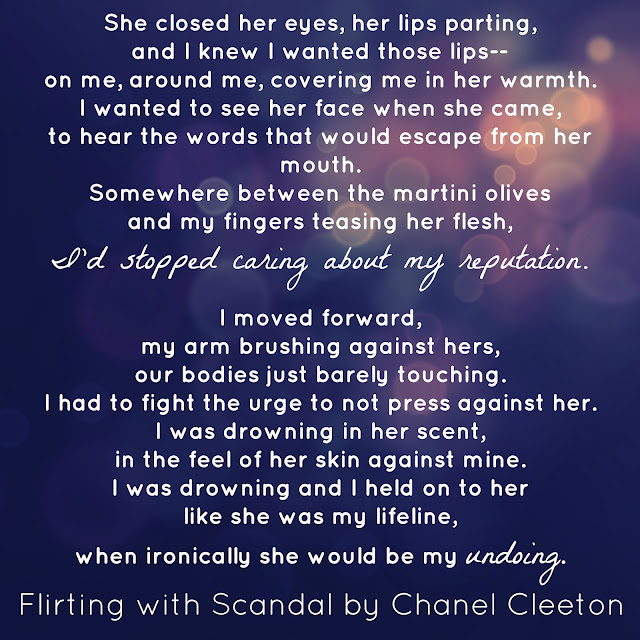