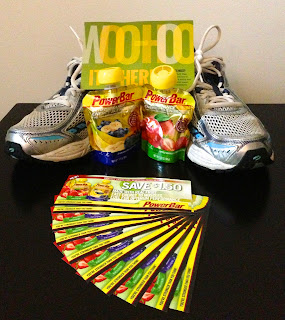 As promised, here is my review of the PowerBar Performance Energy Blends.  I received some free samples of the product to try from BzzAgent, a social marketing site that promotes word-of-mouth advertising.  First I’ll give you what I posted as a review on their website:

When I first received the sample of PowerBar's Performance Energy Blends from BzzAgent, I was excited to try it as I was hoping it could be a good alternative to gels for fueling either a workout or long run.  After trying the product, I can say that it is a good fuel option for a short workout (under an hour), though as for using it on a long run for me it would not be ideal as it would not last long enough.  I would have to carry multiple packets with me to use on a long run which frankly I would not have room for in my pockets/belt.  The other thing that I wasn't too thrilled with was the consistency of the product.  It is thinner/more liquid-y than a gel would be and while the flavors were good, I was a bit nauseated by the consistency.  If you can handle something like that while doing strenuous activity, then this would be a good option for you...if not, do like I'll be doing and pass on it for a different option.

The consistency was really what got to me on these.  See, when it comes to gels (like Gu or Hammer, etc), I was always fine with the consistency until about the last year when having 2 or more during a long mile outing was starting to kind of gross me out.  And so I started using Chomps instead.  The Chomps I can handle no problem, after all it’s kind of just like eating gummies.  The only issue with Chomps is them sticking to your teeth, which after a little bit that goes away.

With the PowerBar Performance Energy Blends, I thought that even with the sort-of gel like consistency (or what I thought would be gel-like from the feel of the packets) I might be able to handle it fine since it was fruit.  Yeah, not so much.  The Blends were actually a thinner/more liquid consistency than the gels and although I did like the flavors I don’t think I could stomach downing those on a regular basis...especially not on a long mile outing.  Consistency aside, as a fuel source it worked fine, though it doesn’t last quite as long as a gel-at least not for me.  But then again, the Gu gels I use have 100 calories and the Blends had 80 so that is probably a part of it not lasting as long.

I had picked up a few extra packets and still have one left in the apple-mango-strawberry flavor if anyone is interested.  I also still have several “$1.50 off of 2 packets” coupons left if anyone would like.  The packet and coupons I have left will be first come, first served so if you’d like either the last packet or some coupons, either comment below or shoot me an email at thedisneyworldfiles at gmail dot com.

Have you tried PowerBar’s Performance Energy Blends?  What did you think?  What is your go-to fueling source?

*As always, even though I received this product for free thanks to the BzzAgent program, all opinions stated above are mine and mine alone.
Email ThisBlogThis!Share to TwitterShare to FacebookShare to Pinterest
Labels: BzzAgent, fueling, PowerBar Performance Energy Blends, review