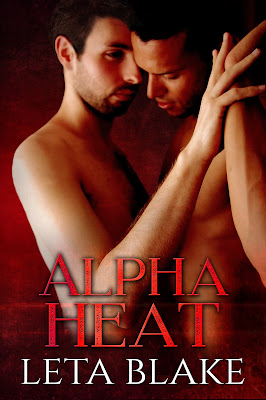 A desperate young alpha. An older alpha with a hero complex. A forbidden love that can't be denied.

Young Xan Heelies knows he can never have what he truly wants: a passionate romance and happy-ever-after with another alpha. It's not only forbidden by the prevailing faith of the land, but such acts are illegal.

Urho Chase is a middle-aged alpha with a heartbreaking past. Careful, controlled, and steadfast, his friends dub him old-fashioned and staid. When Urho discovers a dangerous side to Xan's life that he never imagined, his world is rocked and he's consumed by desire. The carefully sewn seams that held him together after the loss of his omega and son come apart-and so does he.

But to love each other and make a life together, Xan and Urho risk utter ruin. With the acceptance and support of Caleb, Xan's asexual and aromantic omega and dear friend, they must find the strength to embrace danger and build the family they deserve.

This gay romance novel by Leta Blake is the second in the Slow Heat universe. It's 130,000 words, with a strong happy ending and a well-crafted, non-shifter Omegaverse. It features alphas, betas, omegas, male pregnancy, heat, and knotting. No cheating. Content warning for brief sexual violence.

First—you really need to read Slow Heat first before starting Alpha Heat so you can get background on the characters.  Not just Xan and Urho, but you’ll want to know about the others as well since things learned in the first book come into play here in the second.  Keep this in mind while reading my review since I mention things that may be spoilers for the first book here.

After meeting both Xan and Urho in Slow Heat, my interest was piqued to find out how things would work between them in this second book of the series.  The impression I got of Xan in the first book had me concerned for how things would go for him once Jason was off limits.  And Urho came across as a bit brash and at times a bit overbearing…though I suppose it could be said that these are alpha traits anyway.

One thing I’ve learned in reading this series is that while the character types (alpha/beta/omega) as they are described in the stories may make you want to draw exact parallels to our own world and the male/female or gay/straight/full spectrum dynamics, you can’t really apply the same ideas to the world Ms. Blake has created.  Exact comparisons would be unwise and take away from the unique world the author has built, and also cause you to draw incorrect conclusions or to make assumptions that would not be valid in this world.  While there are similarities, the differences are important and you shouldn’t let comparisons to our own world color your view inappropriately for this one.

I was highly concerned for Xan once I found out how he was slaking his desires at the start of this story.  It also bugged me quite a bit once I knew Xan had his own omega, even if they were not erosgape.  But Caleb (Xan’s omega) and his situation make him and Xan a well-suited pair, and their arrangement while unique in an equally unique world works for them.  It also paves the way for Xan and Urho’s developing relationship—no matter how unorthodox it might be.

There’s a lot of complexity to this story, from Xan’s relationship with his family to his relationship with Caleb and with Urho as well.  Not to mention his past with Jason.  There’s a lot going on, because not only do you have the Caleb/Xan/Urho situation but Vale, Jason’s omega and Urho’s former lover, is pregnant (a situation which has it’s its own issues), and as the story progresses there’s escalating tension between Xan and his family (primarily his father and cousin), and once you get to the last quarter of the book it’s constant craziness as everything on all fronts comes to a head.  There are some things that happen (particularly between Caleb, Xan, and Urho physically) that I had guessed early on, but the way all of the different situations come to their crescendo in the last part of the book was quite enough to still keep me on edge until things were fully resolved.

Alpha Heat was a 4-star read for me, the length of the book did make it feel a little drawn out for my taste.  But there was plenty of tension, especially since the extremely unconventional nature of the relationships represented could mean severe or even deadly consequences for all involved.  Plus my interest is piqued to see if Janus might get his own story given what he went through here in this one.  This book is meant strictly for readers 18+ for adult language, some violence in sexual situations, and plenty of sexual content, as well as mpreg.

Author of the bestselling book Smoky Mountain Dreams and the fan favorite Training Season, Leta Blake's educational and professional background is in psychology and finance, respectively. However, her passion has always been for writing. She enjoys crafting romance stories and exploring the psyches of made up people. At home in the Southern U.S., Leta works hard at achieving balance between her day job, her writing, and her family.

May 15 - The Novel Approach, OMG Reads

May 21 - Making It Happen, Dog-Eared Daydreams