Tour-Review, Excerpt and Giveaway: All Played Out by Cora Carmack (A Rusk University Novel)

We are absolutely thrilled to bring you the Review and Excerpt Tour for Cora Carmack’s ALL PLAYED OUT! ALL PLAYED OUT is a New Adult Contemporary Romance and is the 3rd book in the Rusk University Series, published by William Morrow, an imprint of HarperCollins.

About ALL PLAYED OUT:
First person in her family to go to college? CHECK.
Straight A’s? CHECK.
On track to graduate early? CHECK.
Social life? …..yeah, about that….

So Nell does what a smart, dedicated girl like herself does best. She makes a “to do” list of normal college activities.

Rusk University wide receiver Mateo Torres practically wrote the playbook for normal college living. When he’s not on the field, he excels at partying, girls, and more partying. As long as he keeps things light and easy, it’s impossible to get hurt… again. But something about the quiet, shy, sexy-as-hell Nell gets under his skin, and when he learns about her list, he makes it his mission to help her complete it.

Torres is the definition of confident (And sexy. And wild), and he opens up a side of Nell that she’s never known. But as they begin to check off each crazy, exciting, normal item, Nell finds that her frivolous list leads to something more serious than she bargained for. And while Torres is used to taking risks on the field, he has to decide if he’s willing to take the chance when it’s more than just a game.

Together they will have to decide if what they have is just part of the experiment or a chance at something real. 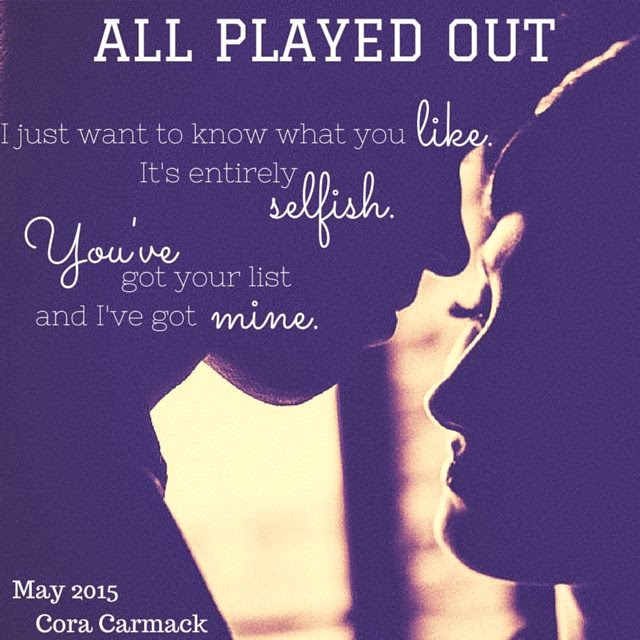 “I can’t believe I’m about to do this. I’ve gone crazy. You’ve made me crazy.”

Torres’s hand lingers at my waist for a long moment before he does what he’s supposed to and helps boost me up onto the base of the Rusk statue that we talked about at breakfast a few days ago. The base alone comes about as high as my chest, and I never could have gotten up without him. Or a ladder. The statue’s pose is reminiscent of the Lincoln Memorial, with Rusk sitting down, only his hand is open and stretched out, and that’s where I’m heading. If I can manage to climb all the way up without falling and breaking my neck. When Texas was an independent republic, Rusk served first as secretary of war and later the Supreme Court chief justice. And when Texas became a state he was elected as one of its first senators.

And now I’m honoring his memory by doing my best to climb up into his lap like he’s some giant bronze Santa Claus. I step up on his foot and try to haul myself up onto his knee, but I have a pitiful amount of upper-body strength. As in … basically none. I jump, hoping that might help, but I only end up clutching ridiculously at the knee, unable to pull myself up but too afraid to let myself drop for fear that I might twist my ankle landing on the statue’s foot.

“I’ve got you, sweetheart,” Torres says, having hopped up behind me with zero assistance. Then his hands are on my ass, and he’s pushing me up onto the knee.

“Did you suggest we do this just so you could grope me?” I call down to him.

Carefully, I climb to my feet, holding on to Rusk’s outstretched arm to keep me steady. Then, after one deep breath, I scramble my way onto his large bronze arm and shimmy my way down into his hand. I sit in his palm, and have to hang one leg over each side. My thighs are a bit too large to fit comfortably, so I feel like I’m wedged into his hand. And one look down at Torres’s grinning face tells me what an idiot I am.

And while it’s holding my weight just fine, there’s no way I don’t look ludicrous. And probably a little lewd.

“Most people don’t actually sit in his hand, do they?”

“It’s the knee for most people, true.”

“What? I figured go big or go home. Besides … it’s pretty f*cking hot.”

“I’m going to kill you as soon as I get down from here.” I start trying to shift myself out of the hand, but my butt really is entirely too large for this thing.

“No! Wait,” he says. “Let me jump down and get a picture. You’re up there already. Might as well make the most of it.”

I try to scowl at him. But it is pretty funny when you think of it. And it will make a good picture. When my brother and I were growing up, Leo’s room had been covered in stuff like this. Photos with friends. He had a big stop sign on his wall that he and his friends had stolen God only knows how. He had souvenirs from places they’d been and things they’d done. Nothing crazy because we weren’t quite well off enough to travel or anything. But little things that meant something to him even if they didn’t matter to anyone else.

I had trophies. Medals. Certificates. Those were my memories. But no one takes those kinds of things to college with them. You’re supposed to pack them away in boxes because as soon as you graduate, they don’t really matter anymore.

But now… I have this.

While Torres descends, I look out at campus. It’s dark, but there are streetlamps dotting the sidewalk. Noble Library is a few blocks over, and is still open, but otherwise the university seems abandoned. The statue is in the middle of a grassy courtyard, surrounded by old oaks trees that have probably been growing since the university was founded back in the late 1800s.

It’s peaceful and beautiful, and it occurs to me that I’ve never just sat somewhere on campus and looked. There’s always been somewhere to go or something to do, and I’ve never taken the time. I lean back on my hands and breathe in the night, and when Torres calls for me to look at him, my smile is wide and genuine.

I throw my hands up and smile even bigger. He laughs and snaps another picture on his phone.

Then something occurs to me, and my stomach tumbles with nerves and a surprising feeling of exhilaration. Can I check two things off my list with this late-night adventure? Can I actually be a little wild for a change? I think about Torres’s words. You’re up there already. Might as well make the most of it. I take a deep breath, shift to sit on my knees, and wait for Torres to slip his phone back in his pocket.

When he looks up, his eyes questioning, I gather my courage and the hem of my shirt and lift it up for one, two, three seconds. Then I tug it back down, keeping my eyes squeezed shut because I’m too scared to see his face. 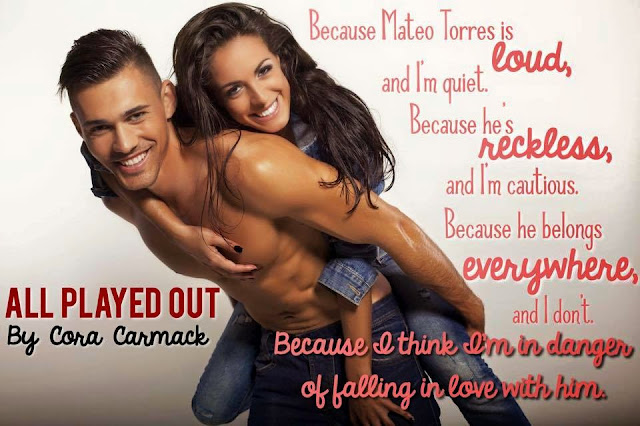 First-the writing.  Excellent flow, attention-getting and once it's grabbed you, the story doesn't let go.  There are characters that are so easy to relate to and easy to like, and all of them fit together so smoothly as a group.  Throw in some great banter-not only between the two lead characters, but also within the group-and you've got a captivating read.

Next-those characters.  Nell is your classic nerdy type who is more concerned about moving forward with her education and getting started on what comes after that.  Mateo Torres is her perfect opposite-a cocky, outgoing jock who can't help but be spellbound by Nell.  The two of them seem like they are so far apart...but put them together and the result is explosive (OMG that pool scene!).  The return of the characters from the first two books helps it feel like I'm just continuing on in a larger overall story of the entire group, and I always love reading books that-while able to stand alone-still tie in to a bigger picture.

And then-the story itself.  Yes, there are other books out there where you have a quiet, introverted college student who tries to break out of the narrowly focused education-only life they've been leading by coming up with a list of typical college activities to try out.  While this is the base plot, the execution of it and the off-the-charts chemistry between the two main characters give you a fresh story with its own special nuances to keep you riveted to the pages.  Nell and Mateo are written to be the perfect complements to each other.

A solid 5-star read, this is probably my favorite story in the Rusk University series so far, and has edged this series onto my top recommendations list.

ALL LINED UP, Book 1

ALL BROKE DOWN, Book 2


For more of what’s next in The Rusk University Series, go here!

Add  Book 4, ALL CLOSED OFF, to your Goodreads now!

Cora Carmack is a twenty-something New York Times bestselling author who likes to write about twenty-something characters. She's done a multitude of things in her life-- boring jobs (like working retail), Fun jobs (like working in a theatre), stressful jobs (like teaching), and dream jobs (like writing). She now splits her time between Austin, TX and New York City and spends her days writing, traveling, and spending way too much time on the internet. In her books, you can expect to find humor, heart, and a whole lot of awkward. Because let’s face it . . . awkward people need love, too.